The Warriors played a tight game that was tied 1-1 going into the eighth inning. It was then that they broke out with four runs that would eventually lead them to a victory. 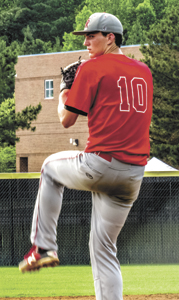 PenSouth Player of the Year Michael Blanchard gets ready to pitch against Hickory High School on Tuesday, helping the Nansemond River Warriors win 5-3.

Coach Mark Stuffel wants his team to continue doing what it is doing.

“Hopefully we can keep playing like we are playing, throw a lot of strikes, play good defense and battle at the plate.”

PenSouth Player of the year Michael Blanchard had a successful game. Blanchard pitched through seven innings, giving up one run, and Johnny Mayer hit a home run in the fourth inning to tie the game at 1-1.

In the eighth inning, Matt Holt walked, followed by Blanchard hitting a double, putting them on second and third. Holt then scored, and Reid Williams hit to score Blanchard. Jarret Henderson singled to center and stole second. Nick Lees hit a single to bring him in, and Wil Davis hit a double to score Henderson.

Overall, Stuffel believed that his team performed pretty well and recognizes that it will be more challenging after today’s game.

“From this point on, we are playing nothing but really good teams, so all you can do is show up and battle,” Stuffel said.

The Warriors next plays the winner of Indian River High School and Menchville High School.