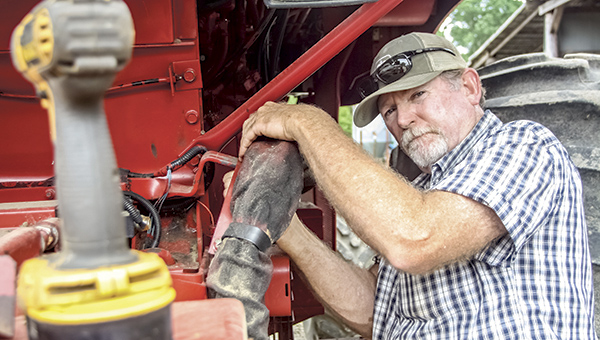 David Bosselman uses downtime from the rain to work on his combine.

Suffolk farmer David Bosselman spent Wednesday repairing the air conditioner in his grain combine — and waiting for fields to stay dry long enough for him to finish planting.

“It’s been an unusually wet May … and it’s been a real problem for us,” said Bosselman, who managed to get most of his peanut and cotton crops in the ground during breaks in the weather in May.

The rain also affected the growth of his 250 acres of corn, which will likely need an extra application of nitrogen soon, he said.

“When we could finally get out there, we worked 13- and-14-hour days playing catch-up,” Bosselman said. “I need to start planting beans … but water is standing in the fields and it keeps on raining.”

With the exception of 50 acres, he finished planting his cotton crop on Saturday, just hours before that day’s rain hit.

During May, the National Weather Service recorded 5.1 inches — and 19 days — of rainfall at the Norfolk International Airport, the closest site to Suffolk where the agency tracks precipitation totals, according to meteorologist Mike Rusnak. The area usually gets about 3.5 inches of rain in May, he said.

Several local farmers said the rainfall was higher — and temperatures significantly lower — in their local communities during May.

The forecast is calling for showers and thunderstorms through Sunday, Rusnak said.

“We have the remnants of Bonnie offshore and a cold front is coming through this weekend,” Rusnak said. “The threat of precipitation is there for just about every day.”

The rain has many local growers two to three weeks behind in their planting, which potentially could create problems with yield and quality of corps during the fall harvesting season, according to Chuckatuck farmers Joe and Shelley Barlow. Although it was too wet to work on their Suffolk farm Thursday, they were able to get into their fields outside of Smithfield.

“Essentially, we have lost three weeks of potential growing time,” Shelley Barlow said. Monte Walden, a farmer in southwestern Suffolk, said he expects to have replant some of his corn.

“This is one of coolest, wettest seasons I’ve ever seen,” said Monte Walden, a farmer in southwestern Suffolk.

There’s likely to be a surge in the United States Department of Agriculture’s prevented planting crop insurance claims filed for unplanted cotton acreage this year, said Holland farmer Mike Griffin. That insurance provides farmers with insurance coverage if extreme weather prevents them from planting designated crops. Most farmers who weren’t able to make the USDA’s May 30 deadline for cotton probably won’t plant it, he said.

“The weather over the last six weeks has had a huge impact on agriculture,” said Griffin. “We have been hammered by rain since the last week in April, some areas more significantly than others.”

Both Griffin and Bosselman say this spring’s weather is a carryover from last fall, when the region received excessive amounts of rain and experienced unseasonably warm temperatures in December 2015.

Extreme wet weather in last six months of 2015 was an issue for farmers across the South, particularly for cotton growers, Griffin added.

“I would go so far as to say it was the single most impactful weather event in agriculture in my lifetime,” Griffin said.

Hop on over to a park

Suffolk residents and visitors who discover the city’s parks this summer could discover a prize just for tracking their visits... read more