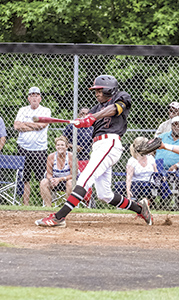 The Warriors advanced to the regional finals with the win. Jarret Henderson pitched for six innings, only giving up one run, with Gage Williams taking over on the mound in the seventh.

Coach Mark Stuffel sees the excitement in his team members’ faces with the victories they have accumulated.

“We got 11 seniors and good leadership, the guys who don’t start the games have been pumped up and excited, and they’ve done a great job keeping the guys in the game pumped up and ready to go,” Stuffel said.

Offensively, the standouts were Dion Jordan, who went 2-4 with two runs batted in, and Jarrid Johnson, who went 1-2 with one run batted in.

Stuffel described a pivotal moment in the seventh inning when the team scored three runs to give themselves some cushion.

“Dion Jordan came up with bases loaded and ripped a line drive into the right center gap, and we scored two runs,” Stuffel said. “Offensively, that was our big moment.”

On the defensive end, Jordan threw a runner out at third base, making a huge play that “helped us get out of a tough situation,” Stuffel said.

With his team doing so well, Stuffel sees his boys playing confidently going into the next game.

“They just need to keep playing the way they’ve been playing.”

Nansemond River’s next game will be Friday against the winner of Mills Godwin and Glen Allen.