The unassuming chicken was the main topic of conversation during Wednesday’s City Council meeting. 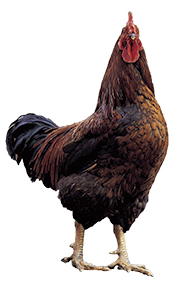 Roosters would not be allowed in neighborhoods under an ordinance change supported by some citizens, but a small number of chickens would be.

More than a dozen people who support allowing backyard chickens in all areas of Suffolk came to the meeting to express their feelings, and three spoke in favor of a change in city code. One man spoke against the measure.

Councilman Tim Johnson, who represents a mostly rural area, has made a renewed push recently for his colleagues to consider a topic they have previously showed no interest in discussing. City staff are in the process of preparing a report to the City Council.

Backyard chickens currently are allowed only in areas zoned rural or for agricultural use, but supporters believe they should be allowed in neighborhoods with limitations.

One of the most important limitations — no roosters.

“We’re talking about hens,” said Rebecca Franklin, who provided a response to many arguments used against backyard chickens. “There will be no morning crowing and no sounds of cock-a-doodle-doo coming from our neighborhood backyards.”

She said most municipal ordinances allowing backyard chickens provide for six hens, a coop and a run. She has had chickens in the past when she lived in a rural area of Suffolk but had to give them up when her family moved to Kilby Shores. She is an animal control supervisor in another city in the region.

“I wouldn’t be standing here today asking for this if I felt like it would cause a burden to the city,” she said.

She said chickens make no more noise than native wild birds, don’t smell as long as the coop is kept clean and free yards of bugs, snakes and rodents. Homeowners’ associations will maintain the ability to make regulations against them, even if city code allows them generally.

A vast majority of the city’s land area is zoned to allow chickens.

“No matter where I live, I have basic rights that allow me to enjoy my property,” she said. “Why should my daughter not grow up in a neighborhood with her best friend three doors down just because I want to have some chickens?”

Her daughter, 8-year-old Tyler Franklin, also spoke during the meeting.

John Hooten, a fellow backyard-chicken enthusiast, outlined some of the benefits of them. They eat kitchen scraps as well as weeds and other yard waste. They help humans avoid the effects of antibiotics, additives, steroids and growth hormones in the commercial egg industry. Chicken manure makes a good fertilizer and increases the water-holding capacity of soil. And they make a good educational experience for children, he said.

“Children love to take care of things, and it helps them learn responsibility,” he said. “What better way for them to learn about sustainability than by experiencing it firsthand from their backyard?”

The anti-chicken voice came from Michael Olson, whose neighbor has chickens.

“I can tell you I do not like chickens,” Olson said. “A lot of people will tell you chickens don’t make noise. I can assure you, they do make noise. Maybe it’s not a lot, but it’s enough for me.”

He said chickens should stay in the areas where they are currently allowed.

“I don’t want to have to deal with chickens,” he said. “They’re a burden to me.”

“This is what our city’s about,” he said. “We want to hear from our citizens. This is just the beginning of the discussion.”