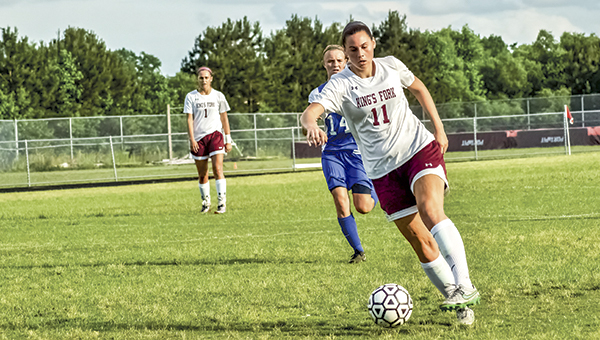 Rebecca Washburn moves the ball down the field during a previous King’s Fork High School game this season. The Lady Bulldogs lost in the regional tournament. (Caroline LaMagna photo)

King’s Fork ended the game in regulation tied 1-1 but in overtime Courtland had more penalty kicks, seven to the Lady Bulldogs’ six, giving them the victory. The Lady Bulldogs put up a tremendous effort to stay alive, but ultimately, that was not enough to prevent them from being knocked out of tournament play.

Coach Mike Marston felt like his girls had a successful season.

“Other than the disappointment of not advancing to states, we accomplished what our main goals were, which was playing better in the end, winning our conference and getting a No. 1 seed in region, and then winning the first regional game in school history,” said Marston. “Those were our main objectives.”

Besides Courtland scoring the tying goal, Marston said that his team completely dominated the second half. Looking back at the game, he wished his team could have capitalized on missed opportunities.

“We had at least four premium goal scoring chances, we were one on one with the keeper, one time we shot it at the goalie and the other three times the ball was just shot wide,” said Marston.

After a defensive back and forth, the game ended at 1-1 leading into two five-minute overtimes. Logan Montel had an opportunity to score at the end of the second overtime, but she redirected the kick about a foot wide of the goal. Afterwards, there were two more five-minute periods of sudden-death overtime, but neither team had a real chance to score. That finally led to the penalty kicks.

“I’ve coached a lot of high level club games and typically when you create those fantastic opportunities and the finishing gods are not smiling on you, it tends to come back and bite you in the end,” Marston said. “At the end of the game, the athletic director for Courtland told us that we are the best team he had seen all year. That’s great, but we would rather have the win.”