A shed in the Magnolia Lakes neighborhood was completely destroyed by fire on Friday afternoon. 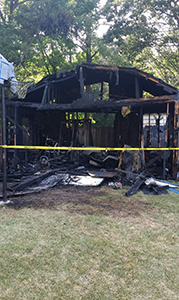 Suffolk Fire & Rescue crews responded to the call in the 4600 block of Camellia Drive. It was reported at 3:36 p.m., and the first units arrived at 3:43 p.m., according to a city press release.

They encountered heavy smoke and flames showing from a detached shed on the property, about 30 feet from the house. The owner was not at home at the time but arrived shortly after firefighters.

A neighbor’s shed suffered minor heat damage to the vinyl siding. There were no injuries, according to the city press release.

The fire was called under control at 3:56 p.m. The shed and its contents were declared a complete loss, according to the press release.

Award-winning photographers Linda and Bill Lane will conduct a workshop at the Suffolk Center for Cultural Arts on June 18.... read more