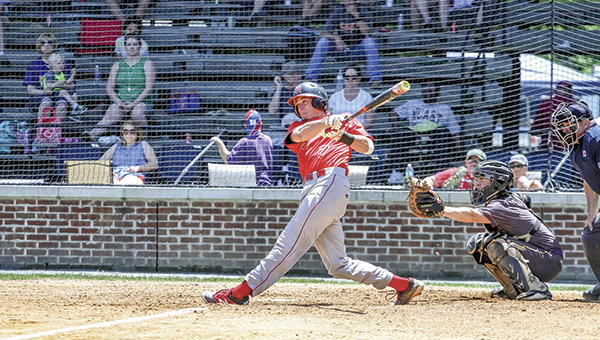 Matt Holt swings during a Nansemond River game earlier this season. Holt was one of four players selected to first team all-PenSouth Conference from Nansemond River.

The Nansemond River High School baseball team saw five players receive PenSouth Conference 10 honors, and one of them was named Player of the Year.

Coach Mark Stuffel said all of his players were deserving of the honors.

“I’ll take my nine over anybody,” said Stuffel. “I told them congratulations, and everybody on the team was clapping for them.”

The Warriors are having a successful season, with a record of 16-7. The team has advanced to the finals of the regional tournament.

Stuffel describes all of his players as having the same type of characteristics and mentality.

“They’re all solid players,” he said. “They’re all good players. Our whole group is good but they can only pick a few kids from our team.”

Stuffel was elated at Blanchard’s selection as Player of the Year.

“He is very deserving of the player of the year, because he has done it for us on the mound and he’s been lights out,” Stuffel said.

When speaking on Blanchard’s season, Stuffel brought up his performance against Grassfield High school, where he had 10 strikeouts.

“Grassfield is a top team in the nation that just got ranked, and Mike threw a complete game,” Stuffel said. “It was just a very good game, and Mike was very good that night.”

“Everybody voted for him,” Stuffel said. “There wasn’t a coach in the room that didn’t vote for him.”