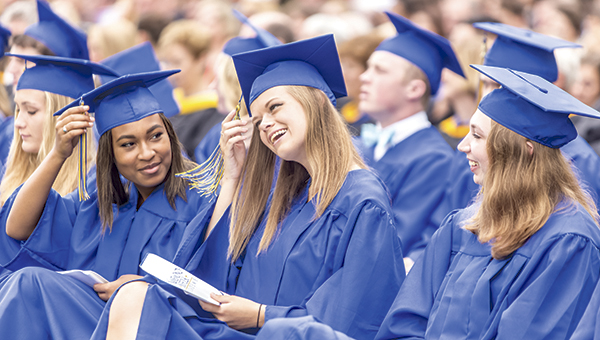 Graduates at Nansemond-Suffolk Academy share a light moment during the school’s 50th commencement ceremonies on Saturday. The school graduated 77 students in the Class of ’16.

With a charge from a former Head of School that their days be “filled with flexibility, standards and much gratitude,” 77 seniors at Nansemond-Suffolk Academy received their diplomas and began looking to the future on Saturday.

As a light mist fell across the grounds at NSA, hundreds of parents, grandparents, friends and neighbors joined the school’s 50th senior class in celebrating the accomplishments of its individual members and listening to the advice of Douglas C. Naismith, who was the chief administrator there from 1989 to 2005.

“Eleven years have flown by since I stood on this platform,” Naismith told the crowd, and the pace of change during that time has only increased. 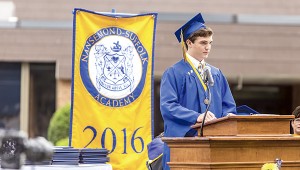 To be effective leaders amidst those changes, flexibility, high standards and a sense of gratitude are important, Naismith said, holding up a rubber band, a ruler and a thank you note as props to help make his point.

NSA has changed radically since it opened 50 years ago, Naismith said, and “flexibility will be a key to (the school’s) success in the next 50 years.”

Similarly as a “tidal wave of change” in society threatens to upend graduates as they move into the next stages of their lives, the new NSA alumni will need to be flexible, while at the same time holding firm to their core values, “the standards and rules of your life.”

He pointed to the school’s motto, “Honor Above All,” as one of those standards, along with the pursuit of excellence that he said NSA students are taught from the earliest grades.

But he also warned the graduates to “avoid excessive certitude,” noting that “people can share the same values but often have very different beliefs.” Flexibility, he said, helps those people to get along, even when their beliefs are very different.

Valedictorian Anuja Jemang Shah congratulated her classmates on their ability to help each other overcome difficulties throughout their school careers.

“We learned to persevere using the constancy of others,” she said, adding that part of the strength of the class lay in its differences.

NSA’s Class of ’16 includes students who live just down the road from the school, students who drove from North Carolina and exchange students from China, who had finished their high school education in Suffolk.

“Stereotypes stand no chance against our overlapping diversity,” she said. “Simultaneously, we are together, different and unique.”

“I believe our class can go anywhere.”

In fact, more than 100 different colleges and universities have accepted members of the class for the fall, according to Head of Upper School Kimberly H. Aston, a graduate of the Class of ’88.