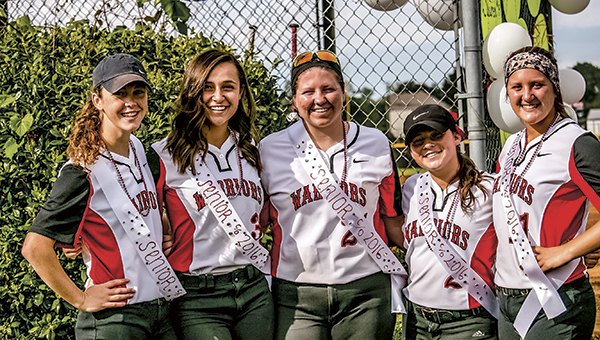 Everyone associated with Nansemond River High School’s softball team has become conditioned to a high level of success.

The final out of the Lady Warriors’ season on Wednesday brought sadness, because it did not mark the end of a win in the state championship game.

It did, however, mark the end of a regional quarterfinal, a game for which the Lady Warriors have become regular qualifiers in recent years.

In 2012, Nansemond River was struggling and finished 4-16, a far cry from a team that could make regional appearances and conference championships seem routine.

Then, a group of freshmen joined the team, along with coach Gabe Rogers, in 2013 leading a transformation of the program.

As their epic high school run has come to a close, Rogers summed up the impact the quintet had on Nansemond River softball.

“They made it relevant,” he said.

He noted his wife went out one night recently for dinner, wearing her Nansemond River softball shirt. She stopped at two different places, and people at both told her they were following the team.

“People started following us again,” he said. “Even your regular people that don’t keep up with softball were keeping track on how we were doing. It made it something exciting within the community.”

The Lady Warriors have gone 78-15 during the last four years, winning a regional championship, two conference tournament titles and three conference regular season titles. They earned three regional tournament berths, and in 2014, they reached the state semifinals for the first time in 19 years.

During the last four years, Maddrey spent many innings in the circle and some in the outfield. Hodgkiss and Mounie traded positions in the middle infield before settling in at shortstop and second base, respectively.

All five girls also have been key contributors on offense, led by Hodgkiss.

Young stars emerged on the team this season, and the senior quintet helped set a clear example for them, along with senior three-year letterman and versatile impact player Lauren Davis.

“The younger girls all watched how they played the game, and they realized this was the standard at Nansemond River — in order to be successful, you have to give everything you have,” Rogers said.

Helping Hodgkiss, Maddrey, McGrath, Mounie and Savage play so well together was a shared history on the diamond.

“We’ve just played together since we were in little league, so we just know each other as a player and a person,” Mounie said.

Bennett’s Creek Little League was the training ground, where the girls often competed.

“But that was still always fun, because it was always a competition, and after the games, you get together, and it was just great,” Hodgkiss said. “And now that it’s over, and we’re not even going to be playing each other in the same college conferences, it’s kind of crazy. But all good things eventually have to come to an end.”

But she does not expect what she and her teammates started at NR to end any time soon.

“I think we definitely changed the name of Nansemond River softball over the past four years,” Hodgkiss said. “I know it’s going to continue in the future, and I have high hopes for the younger girls, because we have a lot of younger athletes coming up and taking our position(s) that are going to perform just as well as us. I have a lot of faith in them.”

They will need to match the will to win that Mounie said she and her teammates have had since day one.

Land transfers for May 27 to June 2