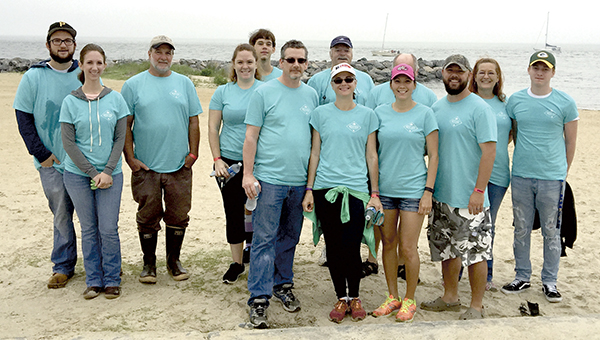 Employees, family and friends of Wanchese Fish Co. in Suffolk gathered at Fort Monroe on Saturday to help clean up beaches and other areas during the Chesapeake Bay Foundation’s annual Clean the Bay Day. The company has a fleet of fishing boats that sails from Hampton. (Robin Napierkowski photo)

On Saturday, volunteers of all ages worked from 9 a.m. until noon to give the Bay a “spring cleaning” for the 28th year. The Clean the Bay Day is an annual Virginia tradition open to any group or person to help save the local waterways.

“The event went very well,” he added. “It is great to see people come together to clean our waterways. When you have that many people coming together for a few hours, you can make a huge difference.” 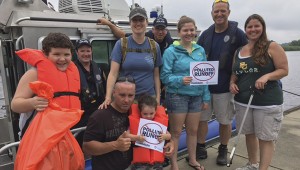 A group from Suffolk cleans up a local park. (Submitted Photo)

In Suffolk there were six sites for local adults and children to contribute to the cleanup, including Bennett’s Creek Park, Sleepy Hole Park, and Lake Meade Park.

Some sites proved to be more challenging than others. Participants were asked to clean parks’ easily accessible areas, to venture through marshy areas, to go off the trails and even to canoe around the creeks to pick up trash.

“In Suffolk approximately 2,290 pounds of litter and debris was collected,” said Wayne Jones, the city’s litter control coordinator. Collected trash included some unusual things “like two mountain bikes, a cooler, three TVs in the river, and part of a floating dock,” he added.

Since 1989, according to the Chesapeake Bay Foundation, Clean the Bay Day has attracted 146,000 volunteers, who have covered 6,900 miles of Virginia and cleaned up 6.4 million pounds of litter.

Litter takes several years to break down, it contaminates drinking water, it spoils the area we live in, and it often kills animals that mistake it for food, the foundation says. The purpose of Clean the Bay Day is to remedy these threats, as well as those of habitat loss and major pollution, and to prevent further damage to the bay.

Another argument against littering is the societal effects it has on a community. According to the Chesapeake Bay Foundation, studies have shown that litter and crime rates are linked.

The Chesapeake Bay Foundation suggests more ways to continue to help save the bay throughout the year: