John Allen “Skip” Sharrett IV was born in Portsmouth on Dec. 3, 1965, but lived in Suffolk most of his life. He was a 1983 graduate of John Yeates High School in Suffolk. He died June 4, 2016, in Chesapeake General Hospital surrounded by his loving family. 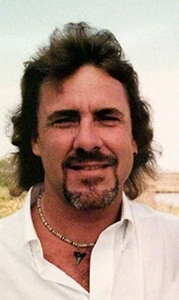 He leaves behind to cherish his memory, his father, John III, and wife, Becky, his mother Judy Gregg, and her husband, Charles, and Charles’ three daughters, Andrea Gregg, Christy Heislip, Rachel Davis, and their families; also, a brother, James Todd Sharrett and his two daughters, Veronica and Victoria Sharrett. He had many aunts, uncles, nieces, nephews and cousins.

Skip also had two special people in his life, Harriet Smith and Andrew Forsythe. The family greatly appreciates the affection and generosity shown by these outstanding friends.

The family wishes to thank the staff at Chesapeake General Hospital for all their compassion and care.

A gathering of remembrance will be held on Friday, June 10, 2016, from 7 to 8:30 p.m. in Sturtevant Funeral Home, Portsmouth Boulevard Chapel.

In lieu of flowers, the family asks that you make a donation, in his name, to the charity of your choice.

Condolences may be made to the family online at www.SturtevantFuneralHome.com.