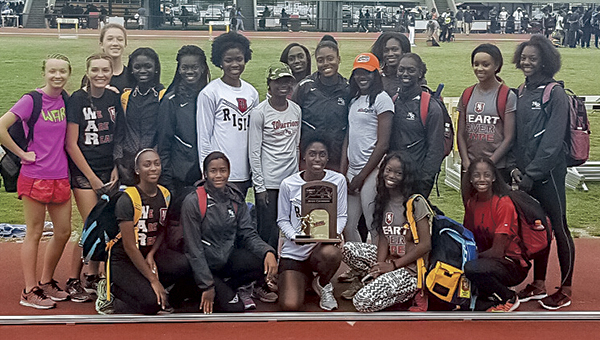 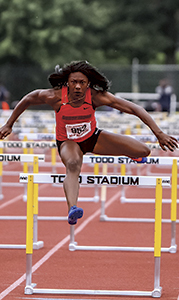 Brandee’ Johnson competes in a hurdles event. She competed in both the 100-meter and 300-meter varieties. (Mary Ann Magnant photo)

Coach Justin Byron is proud of his girls’ performance.

“There are coaches who coach a lifetime and don’t have this type of effort that we had at state,” he said. “I’m really excited about how well they are running as a unit.”

Johnson had a stellar performance over the weekend, grabbing state honors and becoming a state champion. She gave her all in the event, recognizing that it was her last state meet.

“It was a blessing,” she said. “It was my last state meet, so I wanted to go out with a bang. To be entered in those three events and to come out with a state title and help my team to a state championship — it was really great. I really work hard, so to go out with three state titles is good.”

Syaira Richardson is a junior and is looking at stepping up next year to fill the holes the seniors will leave.

“I know I have some shoes to fill, because I’m going to be a senior, and my coach probably expects me to step up a little bit,” she said. “I’m going to prepare myself for that, and hopefully I can end my senior year with a bang by winning another state title.”

Byron said this team was a far cry from when he started five years ago. During that time he has seen the girls grow and become more confident in their abilities.

“When I first got to Nansemond River, the current state of the team wasn’t very competitive,” he said. “At that point my goal was to revitalize the program on both the boys’ and girls’ side, creating a competitive environment that would continue for years down the road.”

Byron knows that the girls have put in hard work to achieve their awards but understands that some may look at it as overnight success.

“I think that sometimes to those outside looking in it may seem like a magic show or overnight success, but one of my favorite quotes is that ‘Overnight success usually takes about seven years,’” he said.

For the boys’ team, Jevon Waller took the state championship in the 100-meter dash and earned first-place All-State honors in that event. Kevin Tohak earned eighth-place All-State recognition in the 800-meter run.

EDITORIAL We’ve written many times on this page about the wonderful legacy left by Amedeo Obici, an Italian immigrant to... read more