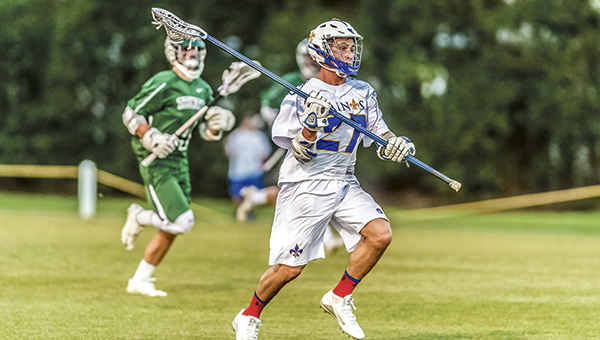 The Nansemond-Suffolk Academy boys’ lacrosse team had two players make All-TCIS teams, and one of those two also earned a spot on the All-State first team.

Coach T.W. Johnson was proud of his players for accomplishing their goals this season.

“This is what makes my job a lot of fun, when you get players like Noah and Reed,” he said. “They practice at a high pace and it really translates well on game day. It’s really been an honor to have both of them in our program.”

Browne improved significantly from his junior to his senior year. He not only played lacrosse but also was an all-conference defensive back in football.

Johnson described Browne as “the one who was tasked with guarding the other teams’ top attack men.”

“He had a terrific season, he really played hard, he was a great leader on our defensive end and a great leader for our team,” Johnson said. “I think Reed is pretty excited that he made first team all-state.”

Noah Dowd has been an offensive constant for the Saints for three years.

“We would not have enjoyed the success of the last three seasons without Noah Dowd,” said Johnson. “He was a big reason why we got into the state championship game two years ago.”

Johnson said Dowd is a smart player and the most skilled athlete he has had in the program over the last three years.

“He had the attention of every defense we played this year, and he still had an all-conference season,” Johnson said.

Coach Johnson understands the level of talent that Browne and Dowd bring.

“Having two all-conference players can only help you,” said Johnson.

But he also knows that both of them are seniors, and they will be missed going into next season.

“We’re going to miss them, but that’s what happens in good programs,” Johnson said. “They graduate, and it’s time for the next group of guys to step up and take over.”