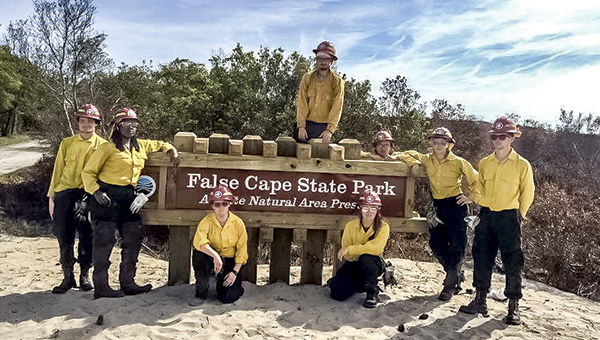 The members of the “Phoenix 2” team based in Suffolk for six weeks celebrate after their first controlled burn. In front are Averie Wheatley and Addison Hanson. Standing are Bryan Eddings, Raven Lewis, Phengsue Lor, Paige Adam and Glenn Hainey. On the sign is Toby Warren.

A team of eight young people from around the country spent about six weeks living at the Great Dismal Swamp National Wildlife Refuge and conducting a variety of community service projects across the Hampton Roads area.

The National Civilian Community Corps team’s primary objective was to conduct prescribed burns to help with wildfire control in local natural areas. But with the weather so wet, the team didn’t get a lot of chance to do that.

“Since the weather was kind of finicky the whole time we were there, we didn’t get to burn as much as we had planned to,” said Addison Hanson, the team leader.

The team was able to conduct prescribed burns at Piney Grove Preserve in Sussex County and Back Bay National Wildlife Refuge in Virginia Beach, Hanson said.

But the team didn’t just sit around while the rain fell. From their base at “crew quarters” off Desert Road, team members called around, networked and found many opportunities to serve, even in bad weather.

“We got the opportunity to work with about 12 nonprofits around the area,” Hanson said. “We worked with everyone from the Norfolk Botanical Gardens, we helped put on a kidney walk in Virginia Beach for the National Kidney Foundation, and we worked at the Good Mojo thrift shop. We worked all across the board.”

Good Mojo is located in Norfolk and benefits the ForKids organization, which serves Suffolk.

The AmeriCorps program lasts for 10 months and has opportunities for young people ages 18 to 24, although team leaders can be older. Various teams work on projects like disaster recovery, infrastructure improvement and more.

In exchange, team members receive $5,775 to help pay for college or to pay back existing student loans, as well as a small living stipend and room and board.

In order to be on a firefighting team, members had to pass a test and take training. From Suffolk, they left for more training in West Virginia at the Mid-Atlantic Wildland Fire Training Academy.

Hanson said people of many different backgrounds apply for the program. Many do it as a “gap year” between high school and college or between college and a career.

Hanson, on the other hand, already holds a bachelor’s degree and held a “real-world job” for about a year and a half as a wedding coordinator in Minneapolis.

Then she found out about the AmeriCorps program.

“I decided that my time would better be served volunteering, as opposed to working at a job that wasn’t really fulfilling to me,” she said. “When I found out there was an age cap on the program, I thought it’s now or never. I wanted to do something that would better myself and the community.”

EDITORIAL Each one of us carries some measure of childlike enthusiasm, some amount of wonder and curiosity waiting to be... read more