At just one and a half years old, Parker Lovingood has already endured two open-heart surgeries. 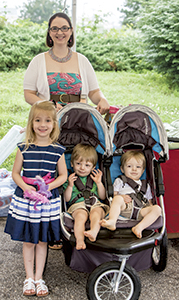 Kristy Lovingood with her children, from left, Abigail, Grayson and Parker, were ambassadors at the Suffolk HeartChase last weekend supporting the American Heart Association. Parker was born with multiple congenital heart defects and has had two open-heart surgeries. (R.E. Spears III/Suffolk News-Herald)

The surgeries, however, were necessary to correct the multiple heart defects he was born with.

Parker and his siblings — twin Grayson, who was born with no heart defects, and older sister Abigail, 4 — and their mother, Kristy Lovingood, were ambassadors during the Suffolk HeartChase, held last Saturday starting at Sports Medicine and Orthopedic Center on Burnetts Way. The event raised nearly $50,000 for the American Heart Association, according to the website.

Lovingood said the family, including her husband, Brian, did not learn of Parker’s heart defect until his two-week checkup.

“Your son’s going to be OK, but he’s very, very sick,” she recalls a doctor saying after summoning an ambulance to take Parker to Children’s Hospital of the King’s Daughters.

Parker had his first open-heart surgery that week, where surgeons placed a shunt that improved blood flow. He stayed in the hospital for 41 days.

But because the shunt did not grow with Parker, the family had to monitor his blood oxygen level continuously for signs that it was time for another surgery.

Parker wore a monitor on his finger at night, and it gave off a shrill alarm if his oxygen level dropped below a certain level. But the only times it went off were when it fell off his finger, Lovingood said.

When he had his second open-heart surgery, doctors were able to repair Parker’s heart completely, Lovingood said.

While Parker will have to be continuously monitored, he seems to be living a normal life, his mom said.

“He does pretty much everything that a normal baby can do — normal toddler, now,” she said.

The family’s experience encouraged Lovingood to support the American Heart Association and also encouraged her to reach out to other moms.

“I didn’t know anybody whose child had gone through something similar like Parker,” she said. “No other mother should ever have to go through what I went through, where there was nobody there for them.”

Lovingood, a registered nurse in the intensive care unit at Sentara Norfolk General Hospital, also said she hopes to switch to Sentara Heart Hospital because of her experience.

During the Heart Chase, teams wore costumes, completed checkpoint challenges and hunted for “Power Ups,” which they tracked on their smartphones.

The four top raising teams, according to the website, were:

The four top raising companies and individuals were: