Blanchard named Player of the Year

Michael Blanchard helped his team make it to the state championship and, for that accomplishment and more, has been named Duke Automotive-Suffolk News-Herald spring Player of the Year. 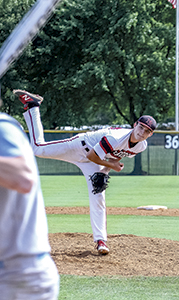 Blanchard is a Nansemond River High School baseball player who received PenSouth Conference Player of the Year and Regional Player of the Year. The state championship appearance was the first in school history and first in Coach Mark Stuffel’s career.

Blanchard started playing baseball when he was 7 and fell in love with it.

“I just like the game itself,” he said. “I just love playing it.”

Blanchard started playing for Nansemond River in the eighth grade. Stuffel said he has seen him develop as a baseball player over the years.

“He has come a long way since then,” Stuffel said. “When he was in eighth grade, he didn’t throw very hard, but he’s developed a lot over the past five years. Now the ball moves a lot when he pitches. It’s hard to handle his fast ball.”

Blanchard understands how much the coaches have helped him, and he appreciates it.

“The coaches have helped me a lot during practice and after the games. They show me what I’m doing wrong and tell me how to fix it,” Blanchard said. “They kept motivating me to get better and the motivation is what has gotten me here today.”

“He works hard at keeping the team together and making sure everyone does the best that they can,” Blanchard said of Stuffel.

Stuffel said Blanchard’s work ethic has stood out and helped him improve.

“His strength is his work ethic,” Stuffel said. “Five years ago, he was an all right pitcher, and he has turned himself into a very good pitcher.”

Blanchard described the Warriors’ season as strong in the beginning with a rough patch in the middle. But he said the team righted the ship toward the end, which allowed them to reach the state championship game.

“If we keep going out and playing the way we have been, we should be able to win any game,” Blanchard said.

“Mike’s a good athlete,” Stuffel said. “He’s a good pitcher and offensively he did a lot for us during the conference, but he’s going to have to be if he is going to be a Division I pitcher.”

Blanchard will be attending Old Dominion University in the fall under a partial scholarship.

He hopes to excel there the same way he excelled at Nansemond River.

“I want to keep on getting better and better so more people will know who I am.”