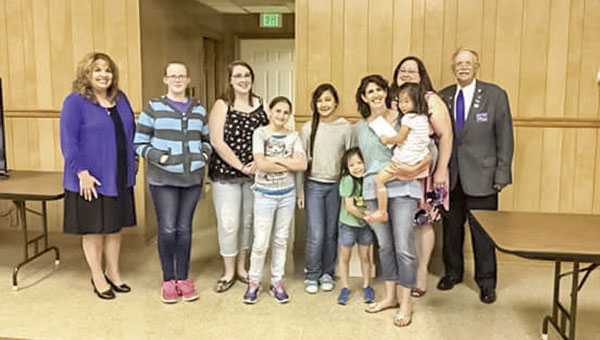 Bethel No. 28 of Job’s Daughters presented a grant for hearing aids to Nicole Camhout, standing in front at right, for her daughter, Cosette Christ, 4.

A 4-year-old Smithfield girl is able to hear better thanks to a group of local girls who raised money for her family to purchase hearing aids.

Cosette Christ was adopted from China two years ago, said her mother, Nicole Camhout. When they adopted her, they knew there was a chance she could lose her hearing due to an inherited condition, but it didn’t look like that would come to fruition.

“When Cosette came from China, she was nonverbal,” Camhout said. “But she had continual language explosion the whole time she was here. Her language was progressing. Her vocabulary was growing.”

But a hearing test showed that Cosette was, in fact, experiencing hearing loss. Unfortunately, Camhout’s husband had just retired from the military, and Tricare does not cover hearing aids for families of retired personnel.

“We hadn’t realize that Tricare would not cover the hearing aids once he was retired,” Camhout said.

Loaner hearing aids from the Children’s Hospital of the King’s Daughters showed that having hearing aids would help Cosette.

“We can understand her clarity. Her pronunciation is clearer. Her behavior has gotten better at school,” Camhout said.

So the family set out to find a way to afford hearing aids for Cosette. Enter Job’s Daughters International, a Masonic-sponsored organization for girls ages 10 to 20.

Camhout said she learned about the H.I.K.E. Fund through Children’s Hospital of the King’s Daughters.

“As you would expect, CHKD is very good with resources to fund hearing aids,” she said.

She made an application for the hearing aids, and the presentation was made last week during a dinner meeting.

“We think it’s fabulous there’s an organization that’s for young women that teaches leadership skills and teaches giving back to the community,” Camhout said. “For people that young to have such a big impact, it’s phenomenal.”