Johnson honored as Player of the Year 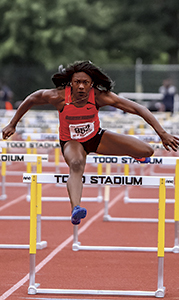 Brandeé Johnson hurdles at the 5A state track and field championship. Johnson received the Duke Automotive-Suffolk News-Herald Player of the Year award for the third time. (MARY ANN MAGNANT PHOTO)

Johnson has had a phenomenal season, culminating in three state championships, one of which broke her own record of 40.87 seconds in the 300-meter hurdles with a time of 40.69 seconds. Johnson also won the 100-meter hurdles and the 200-meter dash.

“It was a blessing,” Johnson said. “It was my last state meet, so to be entered in those events and to come out with a state title and help my team win a state championship, it feels really good.”

Johnson came into the season with a notion of leaving her mark, and that’s what she did.

“This is just adding onto the brand that I’m building so once I leave, everyone will know, and my name will be in the record books,” Johnson said.

Johnson loves the team aspect of the sport but also is thrilled by being able to individually test herself.

“What you do on the track, besides relays, all depends on how hard you work and practice with the things you do on and off the track,” Johnson said.

“I think people confuse her talent with her hard work and commitment,” said Byron.  “With everything she’s accomplished, I can see how different she is when it comes to things like dedication and doing that extra rep.”

Byron started coaching Johnson in the eighth grade. He sees her maturity from when she was younger until now and is pleased by her growth into becoming a dedicated athlete.

“She doesn’t want to be just the best, she also tries to make everyone around her better, and that’s the most important part of her development,” said Byron.

Although the Lady Warriors’ performance at the Penn Relays was good, Johnson was not impressed with herself, showing her drive to work harder.

“I was more dominant at the state meet then I was at Penn,” she said. “We could’ve done a lot more at Penns. But it was an experience that I needed for the season.”

Overall, Johnson is very happy with herself and her team. The camaraderie that has been built at Nansemond River is another reason why she loves track.

“I’m very proud of my team, because we have worked way too hard to get anything less than what we have received at the state championship,” she said.