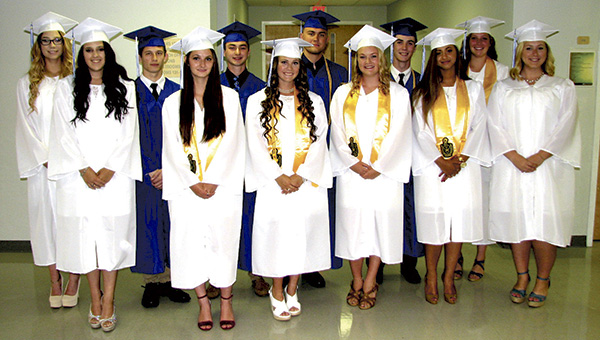 The number 12 has a special significance in the Bible. Christ chose 12 disciples, and there were 12 tribes of Israel.

“I really believe God has a special purpose for your lives,” he told the 12 graduates seated in front of him.

However, they carry with them connections forged through many years of schooling at Suffolk Christian Academy. Two of the graduates — Kenneth Barrick and Lexi Thompson — attended for their entire schooling.

“I am forever grateful for each person that will walk across the stage with me today,” said salutatorian Hannah Pearson.

Valedictorian Emily VanDorn said attending the school was “a corner piece in God’s puzzle” for the 12 students.

“God has put us all here for a reason,” she said. “This has been a place where we are free to be Christians.”

Chorey encouraged the students with his own story of planning a successful career in Pennsylvania soon after college, only to come down with a severe illness. It wasn’t until then that he realized he had never sought God’s guidance.

“I turned to God, the one I’d always known about,” he said. Pointing to his head and then his heart, he continued, “I had the knowledge up here, but not in here.”

He urged the students to “measure your success from God’s perspective.”

“Most people think of success as acquiring wealth, prestige, admirers; but how does God measure success?” he said. “In the world’s eyes, guess who was not really successful 2,000 years ago? Christ.”

On the other hand, Chorey related the story of Jean Paul Getty, the founder of the Getty Oil Company, who was a billionaire but was divorced five times and died a miser.

Chorey also urged the graduates to make their choices wisely.

“Not every choice of friend or action will be what God wants you to do,” he said. “To remain truly free, you must learn to balance individual choices with Biblical truth.