When Allyn LeTourneau tells people he’s participating in a 4,000-mile run across the country this summer, they’re usually amazed or horrified that he’ll be putting his body through such a grueling trip.

“People who have cancer go through so much more pain and suffering than people who are just running,” said LeTourneau, who departs for the trip on June 18. “We’re running for people who are battling cancer.” 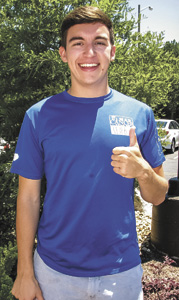 Allyn LeTourneau has been preparing all spring for his cross-country run to raise money for cancer. He said it’s been hard to train in addition to his schoolwork and two jobs, which include being a teacher assistant in the chemistry lab and writing opinions for “The Breeze,” James Madison University’s student newspaper.

LeTourneau joins a team of 26 other runners who will relay across the country. Each runner will run two miles at a time with a partner while the remainder of the team travels ahead.

It works out to between six and 16 miles a day for 49 days for each runner, LeTourneau said, depending on what region of the country they’re covering.

“We’ll probably run less in the mountainous regions,” he said. The run begins in San Francisco and ends in Baltimore.

The pair — or, more likely, several pairs — of running shoes LeTourneau wrecks this summer won’t be his first. He participated in cross country at Nansemond River High School and was on a club cross country team in his first year at James Madison University. He’s a rising junior at JMU this year.

While LeTourneau is no stranger to running, he’s also no stranger to cancer. His father, David LeTourneau, fought cancer when Allyn was in high school. After he recovered, his doctor recommended he start running, so father and son started running together.

“Me running across the country is like a tribute to what we did together,” Allyn LeTourneau said.

The journey across the country isn’t all running. The team will make stops at hospitals to visit young adult cancer patients and also make stops to present scholarships. The scholarships from the Ulman Cancer Fund for Young Adults support young adults continuing their education following their own or a loved one’s battle with cancer.

“That will be pretty cool to see who we’re helping out,” LeTourneau said.

Team members even had to complete a research paper on problems that affect young people battling cancer, LeTourneau said. They also had to meet fundraising goals, blog about their reasons for running and get CPR certified.

“The program does a good job of enforcing things we need to know,” he said.

LeTourneau has raised the minimum amount, $4,500, to go on the run, but he has a goal of $6,000. Visit his fundraising page at 4kforcancer.org/profiles/allyn-letourneau.