Abby Herrod, Katie King, Megan Todd and Kelly Hogan were the recipients of the award for this season. Herrod made first team and King, Todd and Hogan made second. 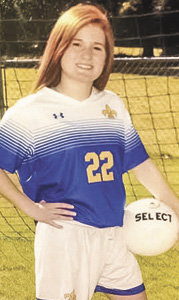 Coach Michael Dick believed Herrod was deserving of the award.

“She had an enormous role in the success of the Nansemond-Suffolk program.”

Dick likens Herrod’s play on the field to that of a Tasmanian devil, saying that her head is always in the game and that she has the capability of taking over a game as well.

“She’s just the bomb,” Dick said jokingly. “She has a wonderful attitude, is selfless and is one of our leading scorers and assistors.

“She will do whatever she thinks she needs to do for the team to win,” Dick continued. “She has an uncanny ability to know what to do in any given moment.”

Kelly Hogan is the center of the Lady Saints’ set and has a tendency to play aggressively.

Katie King is a defensive midfielder who went from defense to offense.

“She went from recovering from an attack from other people to being on the attack,” said Dick. “She would get a couple of touches then get the ball to Abby.”

“It takes a special mindset to be that,” said Dick. “She probably has one of the best attitudes when it comes to being a keeper. She stays focused, organizes the defense and is tough.”

“I don’t know the last time that we had all four of our nominations selected to all-conference,” Dick said. “I think it’s a reflection of the time, effort and dedication that those four in particular put in to try to make this team better.”

A great duet that didn’t happen

By Frank Roberts I spent a half-century interviewing and reviewing many of the country shows that came to Hampton Roads.... read more