Warriors ‘win it all’ 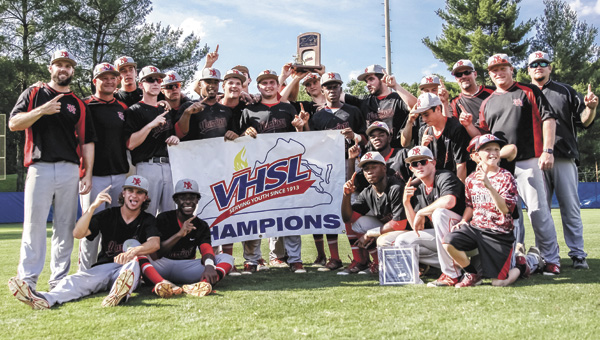 Watching Battlefield’s missed opportunity made the Warriors realize that losing is real, and it’s a feeling they wanted to avoid at all costs.

“Before the game, we had just seen Chantilly beat Battlefield in the last inning,” Jordan said. “They were down 2-0, and they had won with basically one out left, so we didn’t want to be Battlefield.”

Gage Williams was the starting pitcher for the game. He began uneasy but found his rhythm gradually. 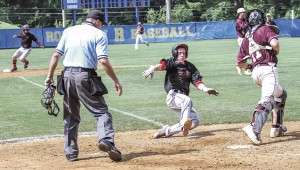 Nick Lees slides to home plate for the go-ahead run, with Chris Henderson following behind at third base. (Wil Davis Photography)

He pitched for five innings, allowing three unearned runs. He walked three and struck out four.

“I was nervous at first, being a sophomore starting in a championship game, but after we put up a few runs I knew that the way that I pitched, I could get out of any jam I was in,” Williams said.

Good pitching from Williams and excellent play by Chris Henderson was a lethal combination that would eventually undo Mountain View. Henderson hit an RBI double in the sixth inning that would put Nansemond River ahead 5-3 and seal the deal for the championship.

“It was a huge moment in the game, because it ended up being the run that gave us the win,” said Henderson. “I didn’t know it was going to be the run that we needed.”

Before that moment, the score was tied 3-3 in a heated competition.

Nick Lees was on first base when Henderson was up to bat. Henderson hit the ball into right field for a double, and Lees ran it in to put the game up 4-3.

“I was happy we took the lead, but I knew that every time we took the lead that game they came back and scored a run, so I was hoping we would put on a couple more runs in that inning,” Lees said.

That would come in the form of Henderson stealing third base and running home to put the Warriors up 5-3 for the final score.

At the end of the game, there was a lot of celebration, especially among the seniors, who were rewarded handsomely for missing their graduation ceremony.

“I was very excited because we were making school history,” Wil Davis said. “This is the first time that Nansemond would have won the state championship, and that was the goal at the beginning of the season for the seniors.”

Nansemond River has 11 seniors, and a majority of them have grown up playing ball together since eighth grade under Stuffel. Corey Fago is one of those seniors, and he said that winning the championship was a goal that was set more than five years ago.

“It’s an unreal moment, a goal we’ve been working on for five years, and it comes with mixed emotions because it kind of hit me as well, that was my last high school baseball game with this group of guys, and it’s something we can all reminisce on later on in life,” said Fago.

Brendan Rackovitch and Johnny Mayer both recalled what Stuffel said after the game.

“He was proud of us,” said Rackovitch. “Most of us have been playing with him since we were eighth-graders, and he watched us grow and develop into what we are today and he knew from the beginning of the season that we had the potential to win it all.”

“He said congratulations for accomplishing the goals that we set at the beginning of the year,” said Mayer.

Andrew Halmrast described an emotional moment with the coach and the seniors in which a goal had finally been fulfilled.

“He talked to us 11 seniors and told us how when we leave its going to be like his own family leaving and he told us to come back and talk to him and that he was going to miss us and we said the same to him.”

“I’m really proud of our guys,” Stuffel said. “It’s a great group, and to win our last game is a pretty neat feeling.”