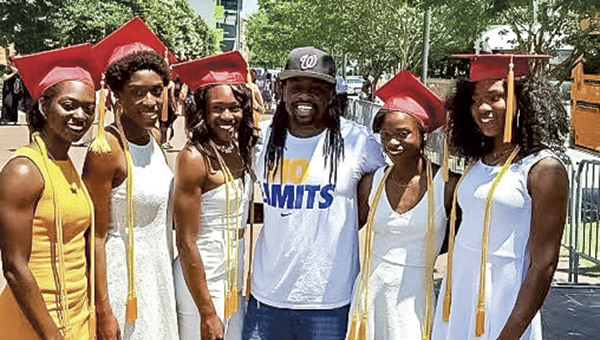 Justin Byron, along with the help of friends and the community, has built a winning track program at Nansemond River High School.

Byron is the track coach at Nansemond River and is loving the development he has seen from the team season to season. When he started, he knew Nansemond River had potential, but he also knew that the team wasn’t in the condition that it needed to be in.

Growing up in Washington, D.C., Byron played all types of sports, but it wasn’t until seventh grade that he tried track. He said he really didn’t take it seriously until his junior year, when he had to decide between that and basketball.

“I made the decision going into the 11th grade to do track full time,” he said. “By the time I took it more seriously, I became one of the better runners in the area.”

“By my sophomore year, I had won the MEAC Conference in the 400 meters,” he said. “In my junior year, I had broken two conference records and was Second-Team All-American.”

But in his senior year, he had a bad asthma attack and was hospitalized.

“I sat out a couple of weeks, and I ended up red-shirting my senior year, and that was actually when I started taking up coaching,” he said.

Byron recalled how he used to shadow his coach, because he wasn’t training, which led to him eventually getting his first coaching certifications in college.

Upon leaving college, he trained professionally in Orlando, Fla., representing the Virgin Islands, where his family is from. He also went overseas to train. Things weren’t going so well in Europe, and Byron happened to be chatting on Facebook with someone from the Suffolk area who knew Olympic gold medalist LaShawn Merritt.

“The guy told me that LaShawn is here, and he could use some training partners,” Byron recalled. “I talked to Lashawn and made my way to Suffolk. But even when I got here, I could not get healthy enough to continue professionally, and that’s when I started coaching.”

Byron’s first coaching job was at Green Run High School and then Great Bridge High School but he wanted to give back to the community that he lived in, so he applied at Nansemond River. It wasn’t until he reached Nansemond River that he felt a sense of community.

“I had a lot more support at Nansemond River than at Green Run or Great Bridge,” he explained. “There was an overwhelming show of support.”

When he arrived at Nansemond River, he knew that in order to build a successful program he would need support from the families, the administration and the community. Byron majored in finance and sees those invested in the program as stakeholders.

“These are our three most important stakeholders,” he said. “I’ve got to have parents, administration and community backing us. I feel like with those elements in place we would be able to build. I was able to present to these stakeholders the things that we were trying to do and give them a vision.

Aquilla Redding, the mother of Brandeé Johnson, the Warriors’ standout track star this year and a contender for a national title this weekend, describes Byron as the greatest track coach.

“If it wasn’t for him, no one would know about Nansemond River track,” she said. “Before he got there, no one even knew how to pronounce Nansemond River. By his third year, we were known as ‘Team War,’ and when we were in the building everyone else was like, ‘Oh my Lord, Nansemond is here.’”

Even as the changes began to take root in the program during his first year, Byron knew he had something special at Nansemond River when his girls’ team won its first state title in the 4×200 relay.

“That was the first state championship that the Nansemond River girls ever won,” he said.

Fast-forward to this season, and the Nansemond River girls’ track team dominated in the state championship, with eight state champions and 31 5A All-State Honors.

Brandeé Johnson broke a VHSL record in the 300-meter hurdles and credits Byron for training her to success.

“My coaching philosophy is a holistic approach to their betterment,” Byron said. “I want each and every kid, when they leave here, to be a better runner, a better student and a better person.