Derrick Bailey and Kris Brown, both graduates of Lakeland High School, are part of the team, which received more than 1,300 online votes, enough to make it eligible to enter the tournament, which has a prize of $2 million. 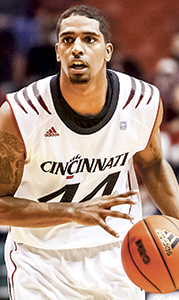 Jaquon Parker is a Suffolk native and the shooting guard for the Seven City Grain team, which has recently been selected to enter “The Basketball Tournament.” (Submitted Photo)

Sixty-four teams made it through the selection process, and they will compete in a single-elimination, winner-take-all tournament sponsored by ESPN, Jack Links Protein Snacks and GoFundMe.

Bailey is the general manager of the team and is excited that Suffolk helped Seven City Grain get into the tournament.

In addition to Bailey and Brown, five other players come from Suffolk. Jaleel Nelson also went to Lakeland, while Jaquon Parker, Davante’ Gardner and Donte Williams came from King’s Fork.

“Everybody is hyped and excited to represent the state of Virginia and the Hampton Roads area,” said Bailey. “I never believed we would get 1,300 votes.”

The team wants to give back to voters in the community by hosting different events in the Suffolk area leading up to the start of the tournament.

“We’re going to give back to everyone who participated in voting by having free food at The Suffolk Auto Exchange, which is one of our sponsors,” Bailey said.

A majority of the teammates are professionals, and their basketball season is ending, but Bailey is confident they are all training hard to get that $2 million.

Brown is the point guard of Seven City Grain and is confident his team can win it all.

“I fully expect us to build some chemistry in these next couple of weeks and really take over and win this tournament,” Brown said. “I’ve got a lot of confidence in the group that we have.”

As the team’s general manager, Bailey is fascinated at how the team has been able to come together so quickly.

“I knew most of the guys from the team, but they were overseas making money, so the way it came together was like it was meant to be,” he said. “No one really knew about this tournament, but everyone joined up.”

If the team wins, it plans to donate $30,000 to the Children’s Hospital of the King’s Daughters.

“We definitely have the money in our budget to give to the CHKD,” Bailey said.

Seven City Grain will practice twice a week starting Saturday at King’s Fork High School from noon to 3:30 p.m. The opening rounds of the tournament will be held on July 9 in four cities across the country. The South Region games, which will include Seven City Grains, will be held at the Grady Cole Center in Charlotte, N.C.

Fans who have voted for a team will be automatically entered for prizes of up to $20,000.