Up, up and away from John Yeates 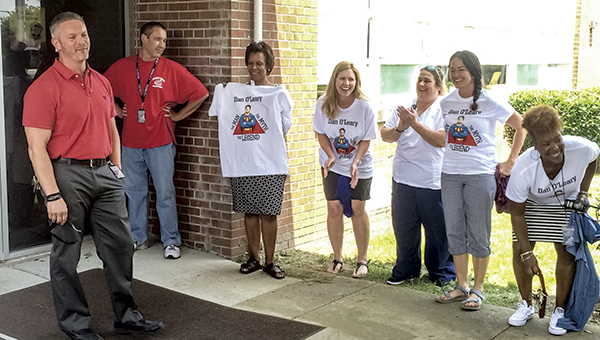 Teachers at John Yeates Middle School on Wednesday threw a party to celebrate Dan O’Leary, who, after a decade as principal, is leaving for Nansemond River High School.

Teachers and staff gathered outside after school ended. O’Leary walked out of his office while speakers blared the Superman theme song.

The faculty and staff all sported T-shirts featuring O’Leary’s face superimposed onto a picture of Superman. The words “the Man, the Myth, the Legend” surrounded the picture.

Tina Klein, who designed the emblem, presented O’Leary with his own shirt. O’Leary shook his head and laughed.

“Thank you guys so much,” he said. “This was awesome.”

O’Leary struck Superhero poses for the camera, before joining the faculty and staff in a joint photograph.

Various staff members congratulated O’Leary as they dug into a spread of food donated by teachers and parents.

“It’s easy to see how much we love and appreciate him,” Klein said.

Klein, who teaches seventh grade, said she came up with the T-shirt after experimenting with design software during a professional development program.

“I was thinking we needed to do something special for him,” she said. “We decided on the T-shirt because he’s got such a great sense of humor.”

Klein said she sold 56 T-shirts for the party.

Many teachers wore the shirts under their regular clothing for much of the day, waiting to surprise O’Leary once school let out at noon.

When asked what he thought of the shirt, O’Leary laughed.

“I think they all have a problem,” he joked.

O’Leary said the extent of the celebration was overwhelming.

“I feel humbled,” he said. “We have such a great faculty here.”

Betty Frederick, who has worked at John Yeates for more than 20 years, said the whole staff appreciates O’Leary’s work.

“He’s very organized and he has a heart for the teachers and the children,” Frederick said.

O’Leary will take over as principal of Nansemond River High School on July 1. He is replacing Thomas McLemore, who is retiring.

It will be a return to Nansemond River, where he began his teaching career in 1990.

Shawn Green, the current vice principal at John Yeates, will take over as principal after O’Leary leaves.

As the faculty and staff grabbed lunch from the spread of food, O’Leary introduced Green as his successor and thanked the crowd.

Suffolk Sheriff’s Deputy Mike Ambrose watches as students, including Julian Lindblad, sign a pledge to be safe around pools this... read more