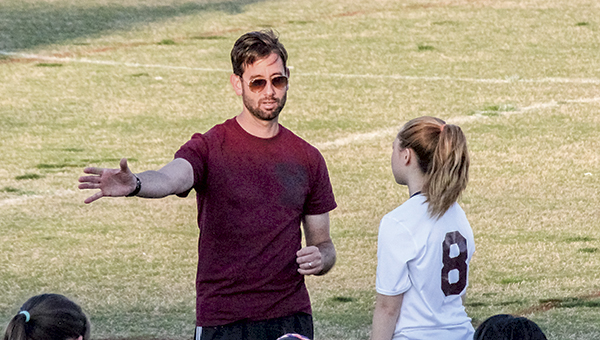 Mike Marston coaches Abigail Bilby on the sideline during a game. Marston started out coaching his daughter — and other future King’s Fork High School soccer stars — in the Suffolk Youth Athletic Association.

Mike Marston dedicates himself to the players of the King’s Fork High School girls’ soccer team by instilling core principles that will help them on and off the field.

Marston started coaching in the Suffolk Youth Athletic Association back in 2002.

“I started out as a volunteer coach, coaching my older daughter’s team,” said Marston.

As the years went on, the league wanted to expand, thus creating an advanced soccer team. His daughter was in the age range for the advanced team, and that’s when he started coaching there. Marston coached the advanced team for two years and then decided to take coaching more seriously.

“I got my national E license and my national D license over the next few years,” said Marston.

Both his daughter, Emma Marston, and Logan Montel were on these teams, and as they continued to advance, so did Marston — all the way to high school.

“When my daughter was a sophomore at King’s Fork, that’s when I applied for the job,” said Marston.

Marston has been the head coach of King’s Fork for the past two years and the assistant his first year.

“It’s the connection to the players and the ticket to the best seat in the house that I love about it,” Marston said of why he loves coaching.

The Lady Bulldogs had a successful season this year, advancing to the regional semi-finals with a record of 12-9. But even with the success on the field, he wants to make sure his players are prepared in the classroom as well.

“All of the players that have been with me for a long time are all honor roll students,” Marston said. “If they start to stray off the path, they seem to gravitate back towards each other when the season begins.”

As the players got older and the team continued to get better, Marston never lost sight of what he was truly trying to accomplish.

“My true main objective was to give these girls an opportunity to compete at the highest level, so if they wanted to play in college, that would be an option,” Marston said. “My main focus has always been to get these girls a peer group of similar minded people, both from an educational and athletic standpoint.”

His daughter as well as a few other players he came up with have now graduated. Marston believes they are prepared for the real world, in part thanks to softball.

“Everything they do in life on and off the field is about creating options for themselves,” Marston said. “So when there is a fork in the road, it’s their option which road they want to take, so it’s not forced on them.”

The Rose family continues to dominate on the track in AAU meets after having won 10 medals during the AAU... read more