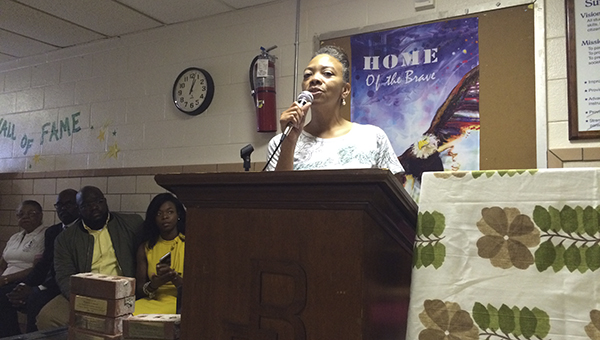 Principal Melodie Griffin delivers a short speech about the meaning of Florence Bowser Elementary School in front of students, administrators and former principals.

People gathered in the intersection of the school’s two hallways to remember the school and the woman for whom it is named.

Principal Melodie Griffin and Vice Principal Cheryl Riddick both gave speeches saying what the school has meant to them.

Florence Bowser Elementary is a small school, housing only two grades, kindergarten and first. Its age shows, but, Riddick says, the school itself is a treasure.

“The brick and mortar of the building will no longer be with us,” Riddick said, “but the spirit will still be here.”

That school, a Rosenwald school, was built in 1920, partially using funds from the Julius Rosenwald Fund, which provided seed money for schools to educate black students in the segregated south. It stands only a few feet away from Florence Bowser Elementary.

The original four-room schoolhouse is now dilapidated and unsafe, but it still carries the legacy of the woman who campaigned for its construction. It will also be demolished to make way for the new elementary school, which will open in 2018.

Though it is necessary to build a new building, Suffolk Superintendent Deran Whitney said Florence Bowser Elementary will always have a special place in his heart.

“I’ve always been impressed with the joy I see at this school,” Whitney said, “not just from the students, but from the faculty and staff, too.”

It was evident that the school held a place in the hearts of many. Four former principals of the school attended the ceremony to wish the school goodbye.

Fran Barnes, who was principal from 2011 to 2013, said the school leaves a mark on everybody who worked there.

“I think it’s partly because it is small,” Barnes said, “so we go through celebrations and trials together and become very close.”

Riddick awarded bricks adorned with a gold plaque to each of the former principals, as well as to Whitney and to Karyn Childs, Bowser’s great-granddaughter, in honor of Bowser’s memory.

At the end of the assembly, students sang “Time to Say Goodbye,” a melancholy farewell song. When the song finished, the children held up paper eagles, the school’s mascot.

However, before proceedings were brought to a close, Whitney came up to the podium for one last announcement.

Whitney said the School Board voted unanimously to name the new school Florence Bowser, so the legacy will live on.

“On these grounds, I felt camaraderie, rich history and support,” Whitney said, “and we wanted to continue that tradition.”

The new beginning to come put a happy mark on a bittersweet day.

Ryan Madei, a kindergartner, said he wanted to stay at Florence Bowser, but is excited for the new school.