A fresh look at Farm Fresh 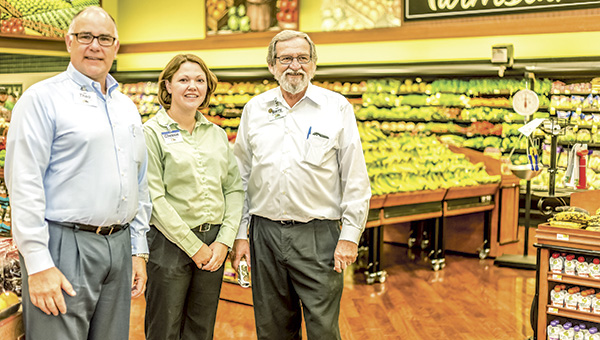 A recent renovation has added even more “fresh” to the offerings at the Farm Fresh supermarket on North Main Street.

Company and city officials got together last Saturday to mark the completion of renovations of the 52,000-square-foot store in the Suffolk Shopping Center, one of seven stores the regional supermarket chain had on its docket for updates this year.

There was plenty to be seen and a whole new experience or two for customers to enjoy, following eight weeks of work and nearly a million dollars worth of new investment into the store.

From new glass cases and display tables throughout the store to the expansion of the refrigerated produce department to a new self-service wing bar, the updates were all designed to serve customers’ changing tastes and shopping patterns, company officials said.

Farm Fresh tries to keep its stores on a rotating seven-year renovation schedule, Theophelakes said. The North Main Street location, which opened in 1984 and is one of the company’s largest stores, has been through a couple of renovations since it opened.

During the last of those renovations, the company added old photos of Suffolk landmarks — some of them now just history — to the walls above some of its freezer and refrigerator cases. The photos have been popular, according to Store Director Barry Dalton, and they were untouched in the latest updates.

But regular customers will notice changes as soon as they enter.

The produce department now includes an area dedicated to organic products, and there are many more types of produce available than had been offered previously.

Display cases throughout the store are larger and brighter, and areas where customer interaction is important — the deli and the cake decorating areas, for example — are designed to make them feel more accessible.

The floral area has been given a central location in the store, and a private room for immunizations and consultations has been added near the pharmacy.

Grocery aisles have been rearranged to reflect the way this particular community uses this particular store, officials said, and there has been a focus on flow and shopping patterns.

“We don’t want to make people have to zigzag across the store,” Theophelakes said.

One part of the store that kids are sure to want to visit is the new candy shop, a large corner stocked with all sorts of sweets and treats and featuring dispensers for both Jelly Belly jellybeans and M&M’s chocolate candies in a rainbow of colors.

After eight weeks or so of trying to accomplish all the updates without closing the store or causing their customers significant hardships, company officials were eager to unveil all the changes on Saturday and hear what folks thought about it.

The feedback, they said, was overwhelmingly positive.

“We had more positive comments on Saturday morning than we’ve had at any grand opening I’ve attended,” Theophelakes said. “The volume lift far surpassed our expectations.”

The University of Cambridge on April 23 conferred the degree of Master of Education, with an emphasis on educational leadership... read more