A packed house at the Helms Center saw 214 graduates walk Chowan University’s commencement stage on May 7.

James Madison University has announced the following students who graduated during the May 6 commencement exercises.

Jay Baines Jr., of Suffolk, graduated from Virginia Wesleyan College on May 14. He received a Bachelor of Arts degree in communications, with a concentration in media and film. He is the son of Mr. and Mrs. Jay Baines Sr., of Suffolk

On Saturday, May 14, on the Worcester Polytechnic Institute campus quadrangle, 907 bachelor’s degrees were awarded during the university’s 148th commencement ceremony.

Coleman Horsley, of Suffolk, was awarded a Bachelor of Science degree in civil engineering with distinction.

This year’s undergraduate address was given by Reshma Saujani, founder and chief executive officer of Girls Who Code, a national nonprofit organization that seeks to equip girls in grades 6 through 12 with computing skills and help close the gender gap in technology. Saujani also received an honorary doctorate in science.

On Saturday, May 21, 2016, Washington College held its 233rd commencement ceremonies. Philip Villaverde, of Suffolk, who majored in political science, was among the students were recognized for their academic achievements. 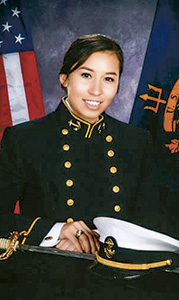 Kristi E. Kilborn, a King’s Fork High School alumna, graduated with a commission from the U.S. Naval Academy on May 27.

Julianna Durand, of Suffolk, earned Dean’s List honors during the spring 2016 semester at Lincoln Memorial University. To be placed on the Dean’s List, the student must be a full-time undergraduate and have a 3.5 grade point average for the semester. More than 400 students achieved the distinction.

Noah Nickert made the Dean’s List at the College of William and Mary for the spring semester of his sophomore year. His parents are Candy and Joe Nickert, and his grandparents are Ossie and Becky Duvall.

Megan E. Blythe made the Dean’s List at West Virginia University Institute of Technology for the fall 2015 semester. She graduated in May with a major in psychology and a minor in biology.

Stephanie Rae Logwood, the daughter of Angie Dorsey, of Suffolk, and 2015 King’s Fork High School graduate, was named to the Dean’s List at Old Dominion University, where she is pursuing her degree in criminal justice.

She has also accepted membership in the National Society of Collegiate Scholars.

‘The man’s a legend’

Thomas McLemore reacts to a gymnasium full of chanting students as he walks a red carpet flanked by cheerleaders during... read more