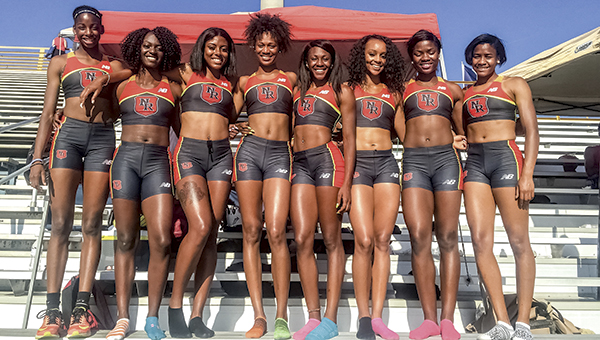 Last year, the girls struggled in the competition, but this year there was no doubt that they had come to perform.

On Saturday morning in the girls’ 4×200 relay, Dajae Goulet, Morgan Towe, Syaira Richardson and Brandeé Johnson ran the fourth-fastest time ever, breaking a meet record and a state record and winning the event.

Although the girls came in first place on Saturday, coach Justin Byron knew that the team had to stay focused.

“We didn’t really have that much time to celebrate, because we knew we had so much more work to do over the weekend,” he said Sunday night.

Later that evening, Johnson finished in second place in the 100-meter hurdles with a time of 13.08, breaking her own state record.

“That was probably the best second place feeling I’ve ever had,” Byron said. “She came in and upset a lot of national big names.”

Going into day three, the team was confident but not cocky, recognizing there was still a ways to go.

“You don’t want to get too excited,” Byron said. “You definitely want to acknowledge these performances, but you still have to stay poised, because we really wanted to do some big things by day three.”

The girls didn’t disappoint on Sunday as they continued their barrage of breaking records. In the 4×100 relay, Towe, Richardson, Johnson and Goulet beat the national meet record, as well as their own state preliminary record of 45.09, by running 45.08.

Unfortunately, they came up short of the coach’s goal of running the race in 44 seconds.

“We wanted to be the first team east of the Mississippi to run 44 seconds,” he said.

Finally, the girls won another national title in the 4×400 meter relay, with Kori Carter joining Richardson, Goulet and Johnson to post another state record, 3:38.05.

“This victory meant the most,” Byron said, “because last year going into the 4×400 our fastest leg (Kara Lyles) tore her ACL in the preliminaries of the 4×100 and wasn’t able to run the 4×400 and we still finished in fourth place. This year we replaced one of the legs with a freshman, and she was able to go out and wing the 4×400, it was almost like a tribute to Lyles.”

Team War also had some male representation at the national championships.

Something special in Chuckatuck

Editorial One of the problems the regionalists will always face in trying to shoehorn the cities of Hampton Roads into... read more