Stuffel shows no signs of slowing down 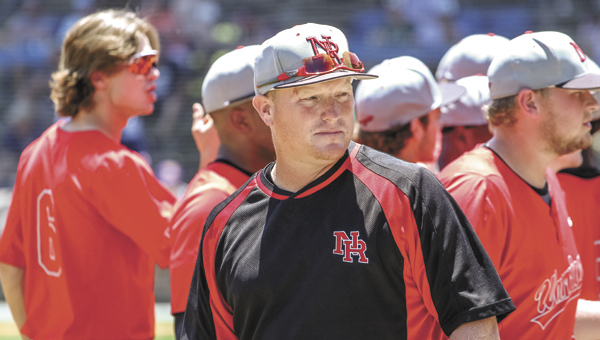 Nansemond River High School Coach Mark Stuffel has received praise from players for his guidance on and off the field that contributed to the team winning its first-ever state championship this month. (Wil Davis Photography)

Stuffel began as an assistant coach at Nansemond River High School in 2001. When he became the head coach two years later, he wanted to make sure the team was unified behind the principles of hard work and discipline.

“The main thing we push for is work ethic,” Stuffel said. “We’ve been in the program for a while now, and everybody succeeds because they put in work.”

“Coach always drives people to do their best, and he works to keep the team together,” former pitcher Michael Blanchard said.

This mantra is something that Stuffel has believed in since he was a young athlete playing third base.

Growing up, Stuffel went to Denbigh High School in Newport News. His passion for baseball was evident back then.

I loved baseball,” he said. “I love the individual battles of pitcher versus hitter and hitter versus defense. I just love baseball.”

After high school, he went to Chowan University, where he studied elementary education.

“I think the education aspect taught me how to be a good teacher, which relates to coaching,” he said. “If you’re a strong people person, you can be successful in coaching, because it’s all about building relationships and trust, the personal aspects that help you to get the best out of your players.”

When speaking about the teams he coached that have stood out to him, Stuffel mentioned this season and the 2011-2012 year.

“The group I had in 2011-2012 was a very strong group,” he said. “We had a couple of kids from those teams playing professional baseball right now.”

This season started off well for the Warriors, but a dry patch in the middle forced the players and coaches to rally to get back on track. Junior pitcher Gage Williams remembers how Stuffel felt about the team staying unified.

“He was proud at how we came together as a team as the season progressed,” Williams said. “And how we had worked hard on our goal.”

A big moment for Stuffel during the season was at the regional championship game, where he earned his 200th career victory.

“It was another victory; 200 wins was a good thing,” he said. “It was pretty cool that the guys did it on that night.”

The Warriors went to the state championship game and defeated Mountain View High School 5-3, giving Stuffel his first state title. After the game, Stuffel talked to his players about the unity he had stressed throughout the season extending to his own children.

“He just thanked us for how well we treated the kids,” Blanchard said. “We made them a part of the team and accepted them, and he got really emotional talking about how the children are going to remember us for treating them so well.”

Stuffel has been in Suffolk for 16 years as a teacher, and now that he’s won his first title, there’s no telling when he’s going to stop.

“As long as I teach, I feel like I’m going to be coaching,” he said.

Participants in a tennis rally night polish their skills. Friday evenings are set aside for rally nights at the Howard... read more