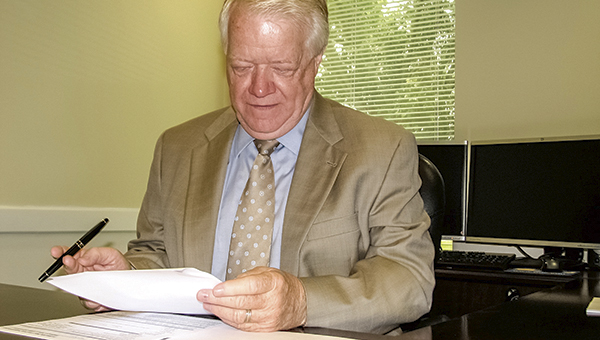 After more than a year at the helm of Paul D. Camp Community College in an interim role, Dr. Bill Aiken said he believes the college is well established to transition to its next permanent president next week.

As he cleaned out his desk this week, Aiken said the college has made good progress in the 14 months or so he has been its leader.

“Experience is what really seems to make a difference,” said Aiken, who has extensive experience as both a permanent and interim community college president. “You learn a little bit everywhere you go.”

In March 2015, Virginia Community College Chancellor Dr. Glenn DuBois abruptly replaced Dr. Paul Conco, who had already announced his retirement, citing concerns about the college’s financial stability and said it was not fit to hand over to a new permanent president in its current condition.

Conco’s replacement was Aiken, who said he set about tackling the college’s challenges in a number of different ways.

“I think the first big thing we looked at was a declining enrollment pattern,” Aiken said. “If we’re going to make any progress, we needed to turn those numbers around.”

This summer’s and fall’s enrollment are also on track to beat the previous year’s, Aiken said.

He attributed the increased enrollment to two things: increased confidence in the college and the rising costs of four-year colleges driving dual-enrollment program enrollment.

“It’s gotten so expensive,” Aiken said. “Parents are recognizing the value of getting an early start at a much reduced cost.”

Other factors could be at play, too.

“We tried to take a personal approach to improving enrollment,” Aiken said. For example, faculty personally called potential students who had been approved for financial aid but never enrolled to encourage them to take another look at the college.

Aiken also developed a strategic plan for the college and refers staff to it at every meeting.

“Rather than being something that’s stuck on the shelf, we really have made it a viable document,” he said. “We ought to know where we’re headed.”

He’s also worked closely with industry leaders in the area to identify a “flagship program” for the college. He said the college is close to doing so but didn’t want to point to any possibilities.

He did, however, say assisting economic development is an important function of the community college.

Aiken said the college aims to triple the number of degrees and certificates it awards by 2021. He also said the Suffolk and Smithfield areas are poised for growth, and a focus on that area would behoove the college in the future.

Aiken pointed to a new initiative signed into law by Gov. Terry McAuliffe this spring that could boost enrollment in high-demand credential programs. The $19 million state investment will pay one-third of the cost of the program when the student completes the program and will pay a second third when the student earns the credential. Students themselves only have to pay one-third.

Aiken also applauded increased giving to the college’s foundation, which pays for professional development and scholarships.

Aiken is moving on next week to Robeson Community College in Lumberton, N.C., where he expects a five- or six-month stint as interim.