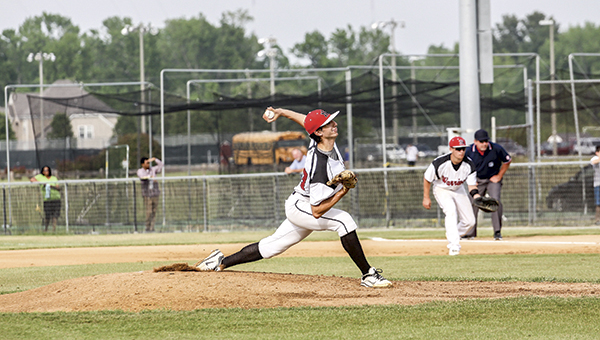 Zach Rice pitches for Nansemond River High School. Rice, who went on to pitch for the University of North Carolina, was drafted last week by the Atlanta Braves and is playing for the minor league team, The Danville Braves. Rice was selected in the 18th round with 529th pick overall. (Wil Davis Photography)

“It was exciting and exhilarating,” Rice said. “My family was really excited, and it was an overwhelming process.”

Rice played for Nansemond River as a pitcher from 2011-2013 and said that his sophomore and junior years were his best years there.

“He’s a left handed pitcher throwing 95,” Stuffel said. “I’m pretty sure he would get picked up by somebody.”

Rice credits Stuffel for helping his game improve as a pitcher.

“He helped to mold me into a more mature pitcher instead of just a thrower,” said Rice.

Rice’s roots in baseball started when he was 4 years old, and his love for it grew over time as he used it as a tool to get his mind off of school. Rice said beating Western Branch High School on Senior Night when he was a junior was one of his biggest moments as a Warrior.

“That gave us the chance to go and play them for the outright district championship, then we beat them again at Great Bridge,” he said. “I would say those two game stand out.”

After a pitching career at the University of North Carolina, Rice was picked up by the Atlanta Braves. He was placed in “Short Season ‘A’ Ball” with the minor league team the Danville Braves. When the Braves selected Rice, they told him that he would be placed in Danville and that he would be coming out of the bullpen for that team.

“I’m actually in Virginia only three hours away from Suffolk,” said Rice. “They get the guys after their college season that has played a good bit of games, and this is what they call ‘short season.’ Which is just 70 games instead of a ton.”

Rice is looking forward to the new team and challenges that lie ahead.

“I want to really command my pitches a little bit better, with that will come success,” he said. “I want to get in there and get my feet wet with pro ball while getting some innings behind me. Hopefully some success will come with that as well.”

The Tidewater Tigers and Chuckatuck Trotters are two Suffolk recreational baseball teams that take pride in their sport while playing... read more