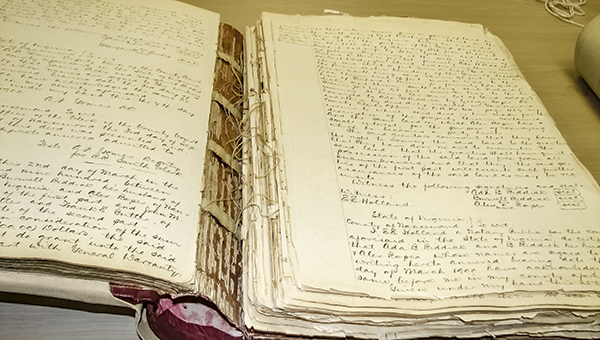 The Suffolk Circuit Court Clerk’s Office recently received a grant to restore three deed books, which contain land sale records from 1866, 1900 and 1906. The books are in such poor shape that the public is not allowed to use them.

Suffolk’s Circuit Court clerk’s office has received a grant that will enable it to restore three volumes of valuable records that are more than 110 years old.

The books, which contain records of Nansemond County land transactions in 1866, 1900 and 1906, respectively, are in such poor shape that the public is not allowed to use them, Circuit Court Clerk Randy Carter said this week.

“We need to get these things put back together,” Carter said. “They’re historical documents. That’s an important part of what I do, to make sure we not only record things but we preserve what we have.”

The oversized volumes contain careful script handwriting recording the details of land transactions. Many pages have fallen away from the binding and are stained, ripped and deteriorated. They sit bound with twine on a top shelf in the records room in the courthouse, out of reach of visitors.

“They’re in very bad shape,” Carter said, adding that the records have been transferred to microfilm to assist people in doing their research. However, it is important to preserve the originals, he said.

“We want to have these books in such a way that future generations can come in and look at the books themselves,” he said. “Things like this need to be preserved.”

Carter said his office keeps more than 300 deed books from Nansemond County and about 60 from the old city of Suffolk. Records since 1974, when the two localities became one, are digitized, he said.

The grant for $14,212 will restore the three deed books with new binding, treatments to halt the aging process and encasements for the pages.

The grant money comes from the Circuit Court Records Preservation Program, which is funded through a $1.50 fee imposed on the cost of recording land transactions and judgments in circuit courts in Virginia.

Carter said it does not require any money from the locality. His office received a grant last year from the same fund to preserve some marriage records, he added.

“These records are vital to surveyors, genealogists, title searchers and attorneys,” according to a press release announcing the grants.

The Circuit Court Records Grant Review Board approved 73 projects totaling nearly $900,000 at its May meeting, including the Suffolk deed books.

Most students, including those at Elephant’s Fork Elementary School, consider silent lunch a punishment. But the fictional Craig, who attends... read more