Most students, including those at Elephant’s Fork Elementary School, consider silent lunch a punishment. 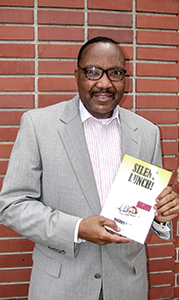 Maurice Huff, a teacher at Elephant’s Fork Elementary School, was inspired to write “Silent Lunch!” by one of his students.

Craig and Hillside Elementary School are the creations of Maurice Huff, a real fifth-grade teacher at Elephant’s Fork. Huff recently wrote his first children’s book about Craig’s desire to get silent lunch.

“I just want to experience everything about elementary school at least once,” Craig tells his dog, Moses, in the book.

Huff said he wrote the book to honor a former student of his, who was a model student and once asked Huff to assign him the punishment because he “just wanted to see how it feels.”

Tragically, that student died in an accident in 2003, the summer after his request, Huff said.

“I wanted to celebrate and honor (the student), and it was something like having fun with the idea of silent lunch,” Huff said. “It’s a fun way to remind kids silent lunch is not punishment, but just something to correct unwanted behavior.”

In the book, Craig is approaching the end of his fifth-grade year and desires to get silent lunch more than anything in the world.

He decides to misbehave intentionally with the goal of getting silent lunch. But because he is such a model student — he has won “Student of the Month” four times this school year, after all — his teachers show mercy and won’t assign him to silent lunch. But a twist in the end has him at the silent lunch table, anyway.

Huff said the librarian at the school helped him get it into the Accelerated Reader program, and the book will be available at the school library this school year.

“The kids liked it,” Huff said. “They thought it was going to be a punitive type thing. But it took away some of the negativity of silent lunch.”

The book is available on Amazon.

EDITORIAL Here’s the bad news: One-third of American adults are at risk of developing Type 2 diabetes. That figure is... read more