Melendez named Athlete of the Year 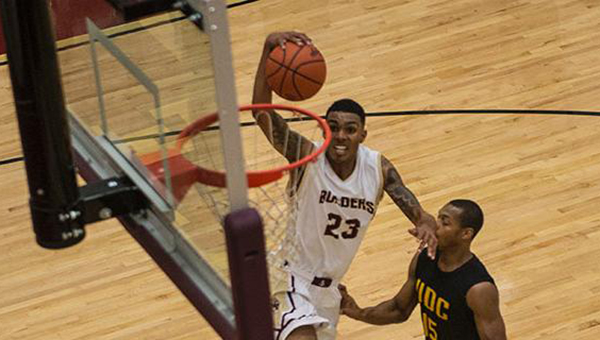 Jay Melendez will be honored this week as the Apprentice School’s Athlete of the Year.

Suffolk native Jay Melendez has achieved one of the highest awards possible in his field, winning the Apprentice School Athlete of the Year award.

Melendez is a senior guard for the Builders basketball team. He has become the all-time three-point scorer and fourth all-time scorer in school history and is proud of what he has accomplished.

“It’s definitely a great honor to be athlete of the year,” he said. “That award covers all sports and makes me realize that the work I’ve put in is not in vain.”

Jay has been playing basketball since he was 5, and he says that his love for the game stems from the camaraderie with his friends and the discipline basketball offers.

“I feel like life outside of basketball and on the court go hand in hand,” said Melendez.

This year on the Builders basketball team, Melendez had to step into a leadership role, which helped him to get the Athlete of the Year honor.

“We were young this year, so I definitely had to step into a role of leadership, but it wasn’t too difficult, because I believe I am a natural born leader,” Melendez said.

He started the Apprentice School after graduating from Nansemond River High School. When he first got there, he became an outside machinist and said things were tough trying to balance work, school and basketball. But within a few weeks of being there, he said he loved it.

“After high school, I went to the Apprentice School, and it was kind of a shock,” he said. “You have to adapt really quick, because you have a full time job, classes and you still have to perform well in your sport. It was a shock at first, but it was very beneficial because it made me grow up and handle responsibilities.”

“Jay has the most potential, and he became a two-time All-American,” said Chatman. “He ended up being one of the best forwards in the history of the school.

“He’s committed to what the Apprentice School stands for. He bought into the whole program and he’s excelled in it. He’s a real pick.”

Melendez’s regular day consists of waking up early, going to work, getting off, studying and then basketball. Once he’s done with basketball, he has homework that has to be turned in the next day.

While leading such a busy lifestyle, Melendez says that time is the key to his success at the Apprentice School.

Melendez said the Apprentice School was the perfect fit for him because it enabled him to earn some money and learn a trade as well as play the game he loves.

“I love this,” he said. “I’m making money, I’m getting an education and I’m still playing basketball. I definitely think it’s one of the best decisions I’ve ever made in my life.”

Jay Melendez will be honored on June 27 at the 67th annual Peninsula Sports Club Headliners Night at the Newport News Marriot at City Center.

By Matthew Hatfield Correspondent   Looking to keep the kids busy this summer? Basketball camp is one way to do... read more