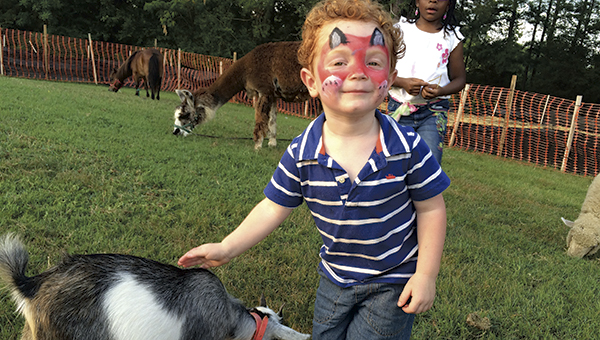 Tate Everett checks out a goat at the petting zoo at the Chuckatuck National Night Out celebration last year. Thousands of people from all over the city joined in their neighborhoods for the annual crime-fighting event.

The crime-fighting event is meant to encourage citizens to take ownership of their communities, to forge connections with their neighbors and to partner with local law enforcement to make neighborhoods safe, as well as to present a united front against criminals.

In Suffolk, thousands participate at dozens of sites across the city every year. Most of the parties are in neighborhood parks and at local businesses and include food, entertainment, children’s activities, community resource information and visits from local law enforcement and elected officials.

National Night Out celebrations nationwide are judged based on a video and notebook of documents related to the event that are submitted after the event. In addition, community judges compare the neighborhood-level celebrations and award certificates after the event, as well.

The National Association of Town Watch produces the annual event, which enjoys participation by more than 37.8 million people in all 50 states, U.S. territories, Canada and U.S. military bases worldwide.

Tuesday’s event will take place from 6 to 7 p.m. in City Council chambers at City Hall, 442 W. Washington St. Groups will be able to sign up to be officially included in this year’s festivities. The first 25 communities to sign up will receive a free banner for their neighborhood.