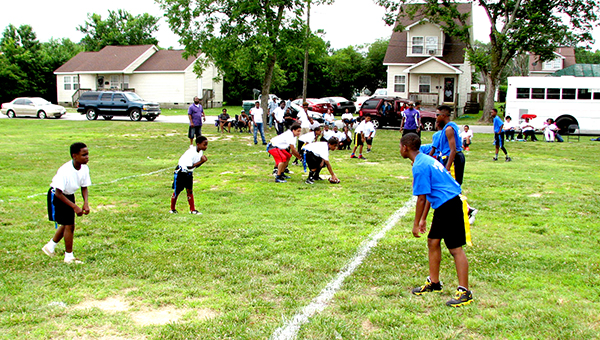 Players from the Suffolk Inner City Youth Athletics Inc. and Straighten Up and Fly Right face off in a flag football game at Greater First Baptist Church Orlando on Saturday.

A game of flag football doesn’t seem too out of the ordinary on a summer Saturday, but the friendly contest that unfolded at Greater First Baptist Church Orlando this weekend was.

“It’s never been done before, with the two organizations playing each other,” said the Rev. Moses Ware. “It’s just a good, fun day.”

He referred to the Suffolk Inner City Youth Athletics Inc. and Straighten Up and Fly Right, two Suffolk youth sports leagues that generally don’t play each other, because they participate in different conferences.

“We want to bring all the kids in the city together on one accord,” Ware said.

The players and spectators got free food before they took the field, had the coin toss, got a pep talk about positive play and kicked the game off. As he watched the game play out, Robert Faulk of Suffolk Inner City Youth Athletics said he hopes the event becomes an annual affair.

“This is a first-time community event within the city,” he said.

Tyron Riddick of Straighten Up and Fly Right agreed.

Riddick said he answered the call “with an eager ‘yes’” when Ware asked about the event.

“We’re uniting to take a stand,” Riddick said. “We’re out here for a friendly game of flag football with an organization we normally wouldn’t play against because we’re in two different leagues.”

Ware said the young people participated in a joint worship session after the game. The church also gave a donation to both organizations and handed out scholarships.

“We want to let them know we’re supporting them,” Ware said.

Firefighters battle a blaze at the Nuts for Wildlife warehouse on County Street on Sunday. (Submitted Photo) The manager of... read more