Edna Brown, 84, of Painted Post, N.Y., and formerly of Suffolk, passed away Thursday, June 23, 2016, at Corning Center for Rehabilitation and Healthcare.

Edna was born in Eagle Rock on May 8, 1932, to Joe and Ethel (Cahoon) Caldwell. She graduated from Fincastle High School in 1949, where she played on the basketball team and edited the school newspaper. She attended Radford College before going to work as a file clerk in Roanoke. She met her husband, Charlie, at a square dance in Fincastle, and they married in 1955. They ran a cattle and sheep farm before moving to Suffolk in 1963. Edna was employed by Vitex Packaging, where she worked her way up from secretary to purchasing agent before retiring after more than 25 years of service. 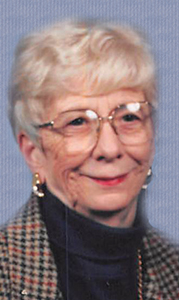 Edna was a tireless servant of her church and community. She held various offices in the local and district PTA and served as chairperson of the Republican Party in Suffolk. During her 50 years as a member of Main Street United Methodist Church, she served as children’s and youth group coordinator, superintendent of Sunday school, administrative board secretary, president of the United Methodist Women and wedding coordinator.

While she fulfilled all her posts with great passion and commitment, she found the most joy in her engagement with children. She planned countless Vacation Bible Schools and Sunday school summer picnics, and the Easter egg hunts she hosted with Charlie became a rite of spring for the children of the church. Main Street was Edna’s second family.

Edna’s talents extended to music and flower arranging. She played the piano for Sunday school groups and had a hand for turning the roses Charlie grew into beautiful arrangements, which she often shared with friends and neighbors. Edna thrived on doing things for others and had a big heart for anyone in need. When she and Charlie bought their cabin refuge off the Blue Ridge Parkway, it didn’t take long for them to establish friendships with neighbors and people at the local Methodist church.

Edna took great pride in her family, and she visited her daughters and their families in New York and Germany whenever possible. In 2009, she and Charlie relocated to Painted Post, N.Y. They quickly made friends at Emeritus Assisted Living, where Edna found a new supervisory activity at the morning coffee hour for residents. Her genteel smile, her Southern hospitality, and her distinctive accent endeared her to everyone she met. She was greatly sustained, however, by her connections to church family back in Virginia, and her daughters are very grateful for all the cards, prayers and support sent up from down South.

No formal services will be held in Corning. A memorial service will be held on Aug. 13, 2016, at 11 a.m. at the Main Street United Methodist Church. 202 N. Main St., Suffolk, VA 23434. Phillips Funeral Home & Cremation Service, 17 W. Pulteney St., Corning, has been entrusted with the arrangements.

The family would like to express their gratitude to the staff at Corning Center for Rehabilitation and Healthcare for their care.

In lieu of flowers, donations may be made in Edna’s name to: Main Street United Methodist Church, 202 N. Main St., Suffolk, VA 23434, c/o The Education Program or to one’s charity of choice.

Kind words and memories may be shared at www.PhillipsFuneralHome.com.