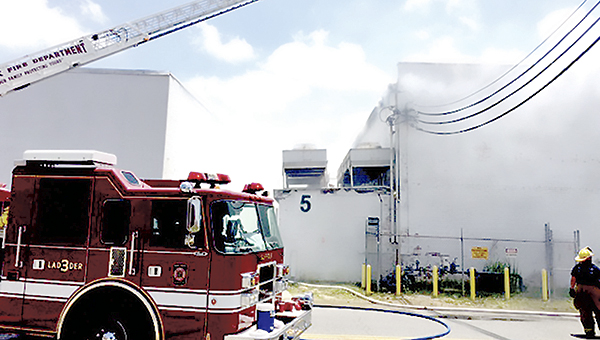 Firefighters battle a blaze at the Nuts for Wildlife warehouse on County Street on Sunday. (Submitted Photo)

The manager of a downtown warehouse said he’s grateful for the quick response of Suffolk Fire and Rescue to a fire at the facility Sunday.

“We’re high on the Suffolk Fire Department today,” said Mat Pope of Nuts for Wildlife. “The firemen who responded to the call had no serious injuries. We’re happy about that, and everything else can be put back together.”

Pope said the fire was a “spontaneous combustion” of peanut skins in the building in the 100 block of County Street. The roof on the storage building is lost, but there is little other damage, Pope said.

“The Suffolk Fire Department did a fantastic job,” he said. “They were here very quickly and did a wonderful job.”

The fire was reported at 11:43 a.m., and the first units were on scene two minutes later, according to a city press release.

The call was upgraded to a second alarm due to the size of the facility and its proximity to other structures, the press release stated. Six engines, two ladders, two medics, two rescue units and several other units, including a rehab truck and two battalions, responded.

Two firefighters suffered injuries not considered life-threatening and were treated and released from Sentara Obici Hospital.

The fire was called under control at 3:38 p.m., but firefighters were still on scene until close to 8 p.m., according to the release. Several streets in the area were closed until about 8 p.m. as well.

Pope said the facility, which mixes wild bird feed, has been in existence at that location for about five years.

Carrollton citizens will find their library closed on Fridays starting this week thanks to budget cuts. Sanford B. Wanner, the... read more