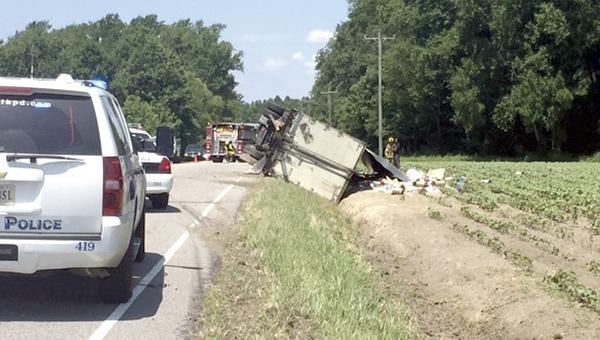 A tractor-trailer crash forced Whaleyville Boulevard to close for part of Monday. (City of Suffolk photo)

An overturned tractor-trailer had part of Whaleyville Boulevard closed for most of Monday afternoon.

The wreck was reported at 10:44 a.m., according to a city press release. The vehicle ran off the right side of the roadway, causing the trailer to slide down into the ditch. The tractor and trailer then overturned, and the load of spooled wire broke free and spilled into the field, according to the release.

A portion of the roadway was closed, and then traffic alternated lanes. However, a detour was put in place later in the afternoon so crews could offload the remaining spools of wire and right the tractor and trailer. Whaleyville Boulevard was closed between Collins and Drum Hill roads.

The adult male driver was uninjured and was charged with failing to maintain a lane of travel.