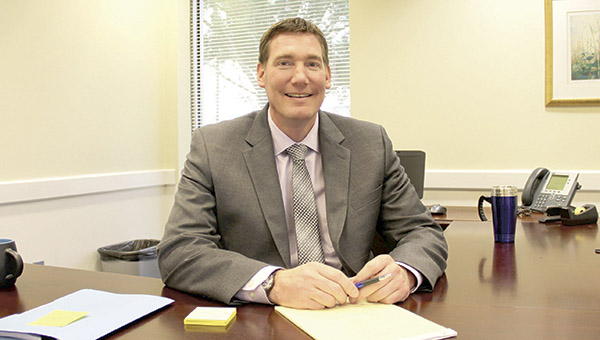 As he takes the reins at Paul D. Camp Community College, Dr. Daniel Lufkin will have the help of a transition team that includes college employees and others.

Lufkin assumes leadership at the local college in July, and the college plans a number of events during which he will be introduced to the community. But the transition team is expected to be especially helpful in helping him get acclimated to Western Tidewater and PDCCC.

Lufkin, whose recent experience in education has been as vice president for student affairs at Thomas Nelson Community College, will replace Dr. William C. Aiken, who has served as PDCCC’s interim president since April 2015.

A concept that began at Patrick Henry Community College in 2012 at the recommendation of Virginia’s Community Colleges, the transition team will include college employees and administrators, as well as foundation and local board members.

“We will also arrange for the president to meet with each local board member individually off-campus at their office or home,” Felts said. “Meeting with various constituents and employees will give him a better idea of issues and concerns on which to focus.”

Lufkin said he is eager to meet people on campus and in the community. The transition team will help this happen more seamlessly.

“I look forward to strengthening partnerships and developing programs that meet the needs of the students and the communities we serve,” he said.

Although Lufkin officially begins his duties in early July, he will be at the college for various meetings and events. Ice cream socials kicked off the series of events, held this month on the Franklin and Hobbs Suffolk campuses.

A floating meet-and-greet session is set for the local board and the foundation board to visit with Lufkin on the Hobbs Suffolk Campus from 6 to 7:30 p.m. July 13.

By Henry Luzzatto Correspondent Everyone who operates a motorboat or personal watercraft has to take a boater safety course before... read more