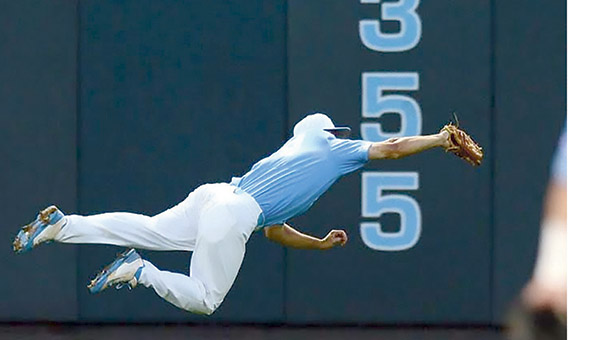 Suffolk native Tyler Ramirez makes a catch for the University of North Carolina at Chapel Hill. He recently signed to the Oakland A’s. (Submitted Photo)

Suffolk native Tyler Ramirez fulfilled his dream last week when he signed a contract with the Oakland A’s.

Ramirez was selected in the seventh round of the draft, going as pick No. 202 overall. The process that led to his signing was overwhelming, and Tyler was thrilled to finally get the call.

“I was really excited and happy, but quite relieved actually, because it had been a long day at that point,” he said.

Ramirez started playing baseball when he was 5 years old. His love for the game stems from the camaraderie he has with his fellow teammates.

“I really love being on a team and feeling the bond with a bunch of guys that all have the same goal,” said Ramirez. “It’s really a game that can humble you.”

Although Ramirez is from Suffolk, he went to high school at Cape Henry Collegiate in Virginia Beach. He loved the coaches and he said that he was eager to learn and get better at his craft. A standout moment for him at Cape Henry was when the team won the championship.

“The day we won the state championship my junior year was the same day I found out that I was going to UNC,” said Ramirez.

After leaving Cape Henry, Ramirez left Virginia to go to The University of North Carolina at Chapel Hill, where he played centerfielder between 2014 and 2016.

“It was awesome,” he said. “It was a great place to be for three years. I really enjoyed it there. The players, coaches and school environment was great.”

In his time at UNC, Ramirez had 47 runs batted in during 54 games, hitting .333 with eight home runs.

Upon getting the good news of being signed by Oakland, Ramirez heard warm words from the organization as well as his family.

“The team congratulated me, telling me that they were happy to select me, and my family was super excited for me,” said Ramirez.

When Ramirez was signed by the Oakland A’s, he was placed in the minor league division. He will start off playing for the Arizona League Athletics team.

He describes himself as playing hard in everything he does concerning baseball, whether it be running, throwing or hitting.

His main goal throughout the whole experience is to live in the moment.

“I just want to have fun and enjoy the ride, however long it goes … just to have fun,” he said.