Builders prepare for ‘Parade’ in Carrollton 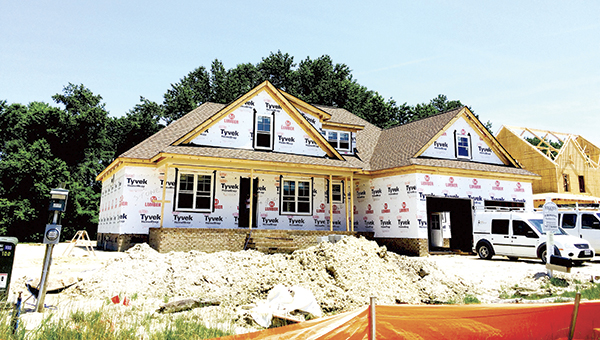 A home under construction in the Founders Pointe neighborhood in Carrollton will be part of the Parade of Homes this year, sponsored by the Peninsula Housing and Builders Association. (Mark Edwards photo)

As construction continues on eight new homes at Founders Pointe in Carrollton, developers and contractors are eagerly anticipating the event at which they will be unveiled.

The Peninsula Housing and Builders Association has once again chosen Founders Pointe for this year’s Parade of Homes. The community has twice been selected as the “Community of the Year” by the association.

“It was about time,” said Leslie Martin, the association’s chief executive officer, about the organization’s decision to return to Carrollton. “Business was slow for custom builders.”

The housing showcase will take place this year Oct. 1-16. The organization has planned live entertainment, children’s activities, wine tastings, food truck vendors, a 5K run and more throughout the event.

Martin predicts the parade will attract more than 30,000 visitors.

There will be a $10 entry fee. When purchasing tickets, donations can also be made to the Roc Solid Foundation, which assist schildren battling cancer with playsets, room renovations and other morale-boosters.

Habitat for Humanity and other local organizations will also benefit from the event.

East West Partners, a regional community developer for more than 25 years, built Founders Pointe in 2005. The community is East West’s third in the county, including Gatling Pointe and Eagle Harbor. East West also developed The Riverfront and Liberty Ridge communities, located in Suffolk and Williamsburg respectively.

East West senior vice president Mark Edwards is particularly optimistic about being a part of another Parade of Homes.

“The market is there, and the hope is [the parade] will attract attention and force the homes to sell out quicker,” Edwards said.

According to Edwards, East West has had its best six-month span of sales since 2006.

More than 200 homes have been built in Founders Pointe during the last decade. The 325-acre waterfront community is expected to have 319 homes when it’s complete.

This year’s Parade of Homes will feature houses along the community’s new lakefront cul-de-sac overlooking Batten Bay. The showcase homes will range from 2,700 to more than 4,250 square feet, with prices from the upper $400,000s to more than $750,000.

This year’s Parade of Homes will be the fifth major home showcase for East West Partners. The 1993 event attracted more than 55,000 visitors to Gatling Pointe South.

In 2010, the Tidewater Builders Association hosted Homearama at Founders Pointe, attracting 30,000 visitors. East West also hosted two other Homearama events at The Riverfront in 2001 and 2011.