From Windsor to the Joffrey

Cheyenne Freeman of Windsor has been tying up her ballet slippers and leaping onto stages across the nation for more than 15 years.

Lately, though, those slippers have taken her onto one of the top dance schools in the nation, the Joffrey Ballet School in New York. 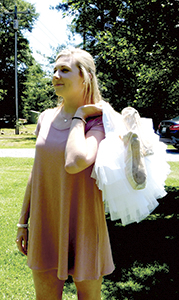 Cheyenne Freeman, pictured posing with a tutu and ballet slippers, studies dance at the Joffrey Ballet School in New York.

Freeman has been dancing since she was just 2 years old. But she didn’t actively pursue ballet until she was 12. Her dance instructor and mentor, Renée Perry Mitchell, encouraged her to start doing summer intensive dance programs around the nation.

Freeman got her start at the Kirov Academy of Ballet in Washington, D.C. From there, she went on to attend Denise Wall’s Dance Energy Ltd. in Virginia Beach, the Dancer Palooza in Long Beach, Calif., and finally, the Joffrey School in Manhattan.

Originally, the school granted her an offer into its yearlong ballet trainee program in 2014. She deferred to the following year to hone her skills.

“I was glad to have attended the summer intensives, because it allowed me to grow accustomed to the people,” Freeman said.

Despite the obvious differences between Windsor’s serene, rural backdrop and Manhattan’s congested city streets, Freeman says she hadn’t experienced culture shock while at Joffrey. The only major adjustment was the fact that she had to be more independent.

A typical day starts with Freeman leaving her dorm by 7:45 a.m. to make it to the dance studio by 8:30. Her training begins with warm-ups, followed by technique work and then working on dance variations for specific shows.

Finally, the class switches gears to contemporary and jazz dance. Instruction typically ends between 5 and 7:30 p.m. Occasionally, she has class on Saturdays.

After a long day of dance, she is tasked with completing her online classes through Keystone, a homeschooling system.

Despite her grueling schedule, Freeman says she has grown remarkably close to her classmates.

“[I built] connections that I will keep for a long time,” she said.

The two major shows of the year were “The Nutcracker” and “Sleeping Beauty,” which were performed at the New York University Skirball Center for the Performing Arts and Florence Gould Hall, respectively.

With her 18th birthday fast approaching, Freeman has some important decisions to make. She plans to attend Joffrey for the 2016-2017 school year. However, she hopes to attend university the following year.

Joffrey does not require its students to attend all four years. But doing so is a requirement for those students wishing to receive a diploma from the school.

After another year at Joffrey, Freeman plans to attend either Pace University or New York University to major in dance. In addition, she will pursue dance professionally.

Freeman has two more credits left until she receives her high school diploma. She expects to graduate in December and hopes to join her class graduation the following summer.

In the midst of juggling dance, she manages to be an honor roll student and is also a National Honor Society member.

When she is not performing, she serves as a teaching assistant and choreographer at Mitchell’s RPM Dance studio in North Suffolk.

Builders prepare for ‘Parade’ in Carrollton

A home under construction in the Founders Pointe neighborhood in Carrollton will be part of the Parade of Homes this... read more