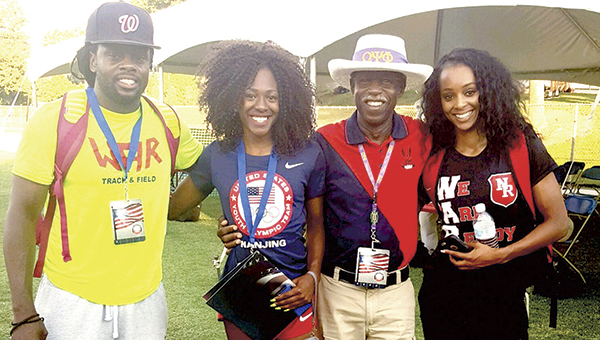 Brandee’ Johnson and Syaira Richardson celebrate after winning yet more track championships at the Junior Outdoor Track and Field Championships in California. They will represent the United States at a meet in Poland next month. (Submitted Photo)

Dajae’ Goulet and Kori Carter also had qualified for the event, but only Richardson and Johnson were able participate.

Warriors’ track coach Justin Byron was pleased that Richardson and Johnson decided to go, understanding what it could mean for their track futures.

“Its the equivalent of the Olympic Trials,” Byron said. “It’s the tryout for the World Juniors Championship team.”

In the 400 hurdles, Johnson ran 56.1 seconds, breaking the Virginia record and clocking the third-fastest time in the country for her under-20 age group.

After facing an ordeal to get to the starting line, Johnson made it look easy when the starter’s pistol fired.

“We had 43 hours of travel between layovers and delayed flights,” Byron said. “Brandeé had an hour to warm up and prepare for her first round of 400 hurdles. The officials tried to scratch her, because she was late. She barely made it on the track, and she ran her preliminary at 59.1, which was the fastest time in Virginia this year.”

For her part, Richardson had been a little hesitant about going to the meet, but she shook off her jitters when it was time to run.

“She was a little nervous about attending, because she was weighing the level of competition,” Byron said.

But there was no need for concern. Richardson ran 53.3 seconds in the open 400-meter dash, finishing in third place and breaking the Virginia outdoor record.

Byron was pleased with his girls’ performances.

“The two girls have the 400 hurdle and the 400-meter dash records for the state — set this weekend by Nansemond,” he said.

Both Richardson and Johnson qualified for the IAAF World Junior Championships, which will be held in Bydgoszcz, Poland, July 19-24.

“Although they both finished third, they both ran so well that they both have been selected to run in the relay pool,” Byron said.

“I said something to them that I don’t say very often, and I said that I was proud of them,” said Byron. “I told them that I appreciate them for committing to the process.”