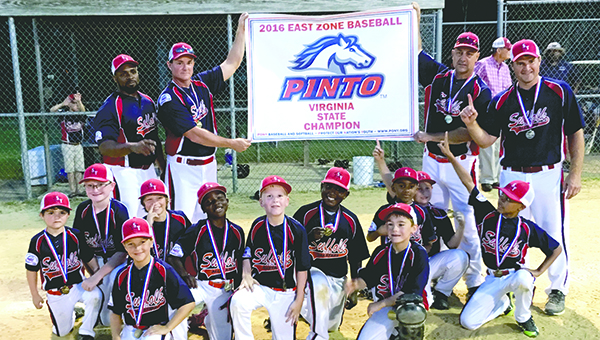 The coach-pitch baseball team, made up of 7- and 8-year-olds, beat Chesterfield National 17-16 to win the state championship.

“It was great,” said Jack Ellenor, who coached the team. “The kids were bouncing all over the place once we won.”

Ellenor said the game was an exciting, back-and-forth match-up, with each team taking the lead at different points.

“We were down and came back up and had to stop them,” said Michael Allen, who played second base for the Pinto all-star team.

Games in the Pinto division are six innings long. Each time a player is at bat, they get six pitches from their coach to hit.

By the end of the fifth inning, SYAA was leading 12-9. Five runs in the top of the the sixth inning stretched the lead to 17-9, but Chesterfield attempted to make a comeback, scoring seven runs in the last inning. Allen made all three outs of the final inning, securing a victory for the team.

Ellenor said defense was key to winning the championship.

“We had great defense,” he said. “We had a double play and a triple play during the game.”

Ellenor said the victory was extra sweet because the SYAA team had lost to Chesterfield just the day before. He said both teams went into the game on Sunday undefeated, but Chesterfield came out on top, winning 14-4.

By the time the tournament final happened on Monday, the kids were ready for another chance.

“They definitely wanted another shot at it,” Ellenor said.

Ellenor has been coaching youth baseball for more than a decade. This was his second time coaching an all-star team, and his first time winning a state tournament.

Most of the kids that brought about this success will not be returning to the Pinto division next season. Instead, they will be moving up to the next level, Mustang, the first division of youth baseball in which the players pitch. Ellenor said the tournament will give them experience to rise to the new level.

“These kids are all ready to go up to the next level,” he said.

Allen said playing for the all-star team was a great experience.

“I enjoy playing on the team,” he said. “I love the teammates, and the coach is great.”

After the game, the players went out and celebrated a successful season with ice cream. Allen said the experience was great.

EDITORIAL As Dr. Bill Aiken prepares to head back to North Carolina after a 14-month stint as interim president of... read more