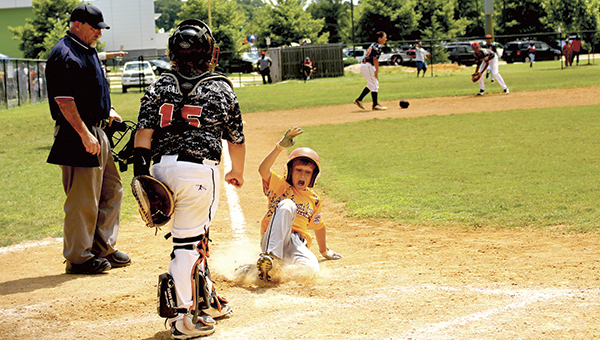 Jason Cooney slides home to score the winning run during the Bennett’s Creek All Stars game versus Churchland. (Submitted Photo)

Summer is the season of baseball. And while the focus may be on the major leagues, America’s pastime can be found close to home in Suffolk’s youth all-stars teams.

There are four youth baseball leagues in Suffolk: Suffolk Youth Athletic Association, Bennett’s Creek Little League, Holland Athletic Association and Nansemond River Pony Baseball League. Though the regular seasons are over in these leagues, kids play throughout the summer in a variety of all-star tournaments.

SYAA, Bennett’s Creek and Nansemond River are all part of Pony Baseball, and they regularly play against one another in all-star tournaments.

Darren Brown, the president of SYAA, said there are significant differences between Pony and Little League Baseball.

“I think the biggest difference is the field size,” he said. “Every time you move up, the field gets bigger. Every two years, you move up to a bigger-sized field in this organization.”

Coaches choose two all-star teams for each division. The first team begins at the district level, and teams can win their way up to the Pony World Series. The second team, which is meant for players who might not make a district team, is entered into a state tournament.

At SYAA, coaches nominate their players for the all-star teams, and the players are agreed on by the coaches.

Jack Ellenor is the coach of the 7- and 8-year-old Pinto team that was named Virginia State Champion on Monday.

“The all-star teams are great for kids,” he said. “It gives them a chance to grow as athletes.”

Though Nansemond River Pony Baseball is a Pony league like SYAA, its organization is very different.

McCarthy said the coaches with the best records during the regular season are chosen to coach Nansemond River’s all-star team.

While Holland combined to make its all-star teams with Nansemond River last year, this year it has a combined team with Surry Athletic Association.

Eric Berard, the coach for the Pinto division’s district all-star team, said this choice resulted from a complicated regular season for the league.

“It’s different now from how it used to be,” Berard said. “They used to play in basically the same league and take the 12 best players. Now it seems like everyone who wants to make an all star team can make one.”

Berard’s joint team was eliminated from the district tournament, finishing in a respectable sixth place out of 16 teams. Despite the elimination, Berard said the experience was good for the kids.

“They enjoyed it,” he said. “The kids learned a lot and progressed, and they’re definitely playing better than they were at the beginning.”

Despite having such a small pool of players, the all-star team has already won its first two games, including an 11-inning thriller on Sunday.

“I’m optimistic about our chances,” said Frank Cooney, the coach for the Bennett’s Creek All-Stars. “The kids have been exceeding expectations. I’m continually impressed with them.”

“I think that’s one of the things that’s special about little league in general,” he said. “The players know about the Little League World Series, so they’re looking forward to it.”

Frank Cooney’s son, Jason, is a catcher for the all-star team. He said the prospect of playing in the World Series is one that all players dream of.

“I would really like to go to the World Series,” he said. “But we have to win our way there.”

Though the youth baseball leagues in Suffolk have their differences, they all have a common goal of furthering kids’ athletic dreams.

“It’s something we always tell our kids,” Frank Cooney said, “in this game, you can go as far as you want to go.”