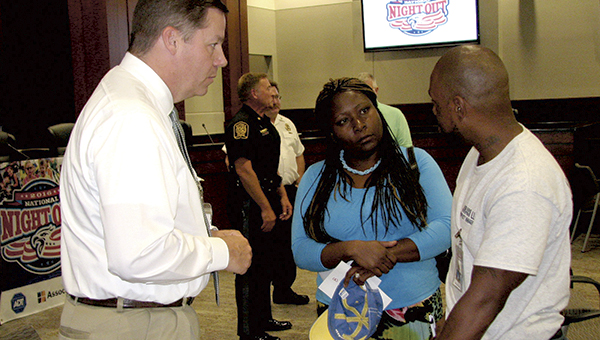 Fewer than five weeks remain until one of the biggest events on Suffolk’s summer calendar, and the kickoff event held this Tuesday geared things up.

National Night Out is coming Aug. 2, and dozens of communities across the city are planning activities in anticipation of thousands of participants. The crime-fighting event, sponsored nationally by the National Association of Town Watch, is meant to present a united front against crime by getting neighbors outside and getting to know one another and law enforcement.

“I remember the very first year when a handful of police officers visited a handful of communities,” Debbie George, the city’s chief of staff, said to a small crowd of about 40 during Tuesday’s kickoff in City Council chambers. “I’ve watched neighbors go back to looking out for each other.”

During National Night Out, many communities hold picnics, children’s activities, flashlight parades, crime-fighting education and more. Law enforcement officers and other city officials tour the city, visiting each registered community and getting to know the citizens they serve.

“Me and my staff get the opportunity to come to your neighborhood and say thank you,” Maj. Gerald Brandsasse said Tuesday. “Our Suffolk residents trust the department. They believe in what we’re doing.”

“I can’t think of any other time in our history that these types of trusting relationships are as important as they are right now in our nation,” city spokeswoman Diana Klink said Tuesday.

“You cannot notice issues if you stay isolated from the world around you, so you must get out and engage,” he said. “It enables us to get to know people we wouldn’t have the opportunity to know, and it allows my community to see there is a place that cares about them.”

Burgess said the event sparked enthusiasm in his congregation.

Community leaders said they have big plans for this year’s National Night Out events.

Antwan and Magaline Robinson plan a celebration at Peanut Park in the Saratoga area.

“I think it will be entertaining for the youth,” Magaline Robinson said. “They’re used to going to an event, but not being in the event.”

“It will give them a positive outlook on life,” Antwan Robinson added.

In the King’s Fork area, Cusi Hamlin and others plan to move a combined celebration that has been held at Sentara Obici Hospital in past years to King’s Fork Middle School. They have also expanded the event to include anyone in the King’s Fork school district, Hamlin said.

Additional entertainment and other resources are lined up for the event, she added. “We need an extra stage.”

The Hillpoint Farms neighborhood plans three smaller events in the next few weeks in the field on Hillpoint Road, Hamlin added. They include an Independence Day picnic from 4 to 8 p.m. July 3; a pet parade and dog walker watch crime prevention program from 6:30 to 8 p.m. July 21; and a Zumbathon from 10 a.m. to noon July 23.

Visit suffolknno.com for more information on the event or to register your neighborhood.