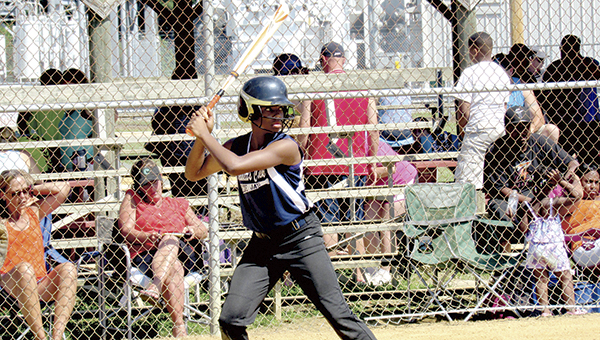 A batter for the Bennett’s Creek Blue Jays prepares for the pitch during the Suffolk Youth Athletic Association’s annual Softball Summer Sizzler.

Things were heating up this weekend at Diamond Springs Park, where the Suffolk Youth Athletic Association hosted its annual Softball Summer Sizzler.

The Summer Sizzler used to be held on the Fourth of July and was called the “Red White and Blue.” Two years ago, according to SYAA’s Michael Clark, things changed.

“We changed it from the July 4th Red White and Blue two years ago, because on July 4th nobody came because everyone was on vacation,” Clark said. “So we moved it to the weekend before that and called it the Summer Sizzler.”

The change in date seems to have paid off, as there were five fields worth of action during this year’s tournament. Among those pursuing trophies were teams from Chesapeake, Smithfield and Little Creek elsewhere around Hampton Roads.

Clark said the organization hopes to have even more teams participating next year.

SYAA President Darren Brown, who also coordinated umpires for the tournament, said the Summer Sizzler was just about the participants having a good time.

“It was a fun tournament,” he said. “It seemed like all of the teams had a good time, and at the end of the day, that’s what you want, because at these age groups it’s about having fun on the field.”